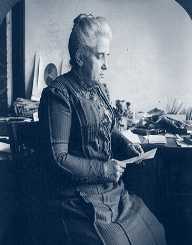 The course for women liberation deserved an activist like Anna Howard Shaw. She was a medical professional, preacher, writer and women’s rights activist. She was born in Newcastle, England on February 14, 1847, and died on July 2, 1919, at the age of 72.

Anna Howard Shaw was born in Newcastle-upon-Tyne, England on February 14, 1847. When she turned four years in 1851, her family moved to the United States in Lawrence, Massachusetts. Her father purchased a large section of land in Northern Michigan and left the rest of his family to live there. The place was desolate and her mother was despaired because life in this wilderness was hard. She and her siblings worked hard in renovating their home by indulging in physical labor like digging the well and cutting down trees. At this time, she was only a 12 year old child exposed to hard work and harsh living conditions.


Call To Preach And Education

When Anna Howard Shaw turned 15 years she decided to become a teacher and contributed much to the family’s income. This income however, could not meet their needs and sustain their expenditure monthly. With her brother wounded in the civil war, her desperate mother at home and the loss of her eldest sister. She became hardened by this situations. She had to quit the teaching job and joined her sister in Big Rapids, Michigan where she attended high school.

Anna Howard Shaw also began preaching while at Michigan although her family was against this decision. They persuaded her to let go of preaching and in return would pay for her college but Shaw was reluctant. Shaw continued preaching and acquired her preacher’s license in 1871. She preached for two years while accumulating funds that would later support her at Albion College in 1873. After college, she enrolled at the Boston University School of Theology being the only woman in her class.

Through struggle and perseverance Anna Howard Shaw graduated in 1878 and led the church in East Dennis, Massachusetts. However, she was not ordained as a preacher at the Methodist Episcopal Church because of being a woman. She was later ordained becoming the first woman to minister in a Methodist Protestant Church. After a while, she went back to Boston University and studied medicine which she never practiced after her graduation in 1885.

Anna Howard Shaw was inspired by Susan B. Anthony who encouraged her to fight for the rights of women. Shaw resigned from preaching and entered the women suffrage movement in 1888 and was elected vice president of the NAWSA. She was the vice president of the National American Woman Suffrage Association (NAWSA) beginning 1892 to 1904.

Anna Howard Shaw became the president of the NAWSA in 1904 but resigned in 1915 due to pressure to support militant tactics in fighting for women’s suffrage. She rather embraced the philosophy of Anthony that did not encourage military intervention and was succeeded by Carrie Chapman Catt.

Anna Howard Shaw became the head of the women’s committee in the United States during World War I at the Council of National defense. She was awarded the Distinguished Service Medal being also the first female to receive the honor. The rest of her later years were spent in lecturing on women’s suffrage and on tours. She suffered from pneumonia and died at the age of 72 on July 2, 1919 in Moylan, Pennsylvania.

Anna Howard Shaw became an outspoken woman in the American history known for her fight on women’s rights. Her speech was ranked at the 27th position in the American Rhetoric’s top 100 speeches. She is also included into the National Women’s Hall of Fame and has a women’s center at Albion College that educates on gender-based issues. Because of her fight for women, an amendment was done in America that gave women the right to vote. The Anna Howard Shaw Center at Boston University and the Anna Howard Shaw Junior High School also bear the legacy she left.

A statue was erected near the Community Library in 1988 in Big Rapids, Michigan to commemorate her struggle for women suffrage.