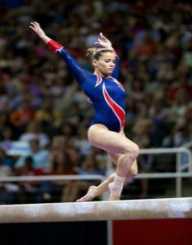 Alicia Sacramone is a retired American artistic gymnast and an Olympic silver medallist. Born on December 3, 1987, she has ten World Championship medals, making her the second most decorated American gymnast in that event. She was a member of the United States’ 2008 Summer Olympics team that won a silver medal.

Alicia Sacramone was born on December 3, 1987, in Boston to Fred and Gail Sacramone. His father was an orthodontist and her mother a hairstylist. Born of an Italian descent, she has a brother, Jonathan. At the age of five, she started training in dance and went into gymnastics at age eight in 1996. She trained at the Gymnastics and More club under coaches Silvia and Mihai Brestyan. She would also train with them as they moved to their own facility in Ashland, Massachusetts. They will remain Sacromones coaches throughout her career. She attended Winchester High School graduating in 2006. She then enrolled in Brown University, where she joined the gymnastics team.

Competing in several competitions at the junior stage, Alicia Sacramone started her elite level career in 2002 and joined the national team the following year. Alicia Sacramone competed in the 2003 National Championship, placing 14th in the all-around, fourth on vault and won bronze in on floor exercise. This gained her a spot in the national team. That same year, she made an international competition debut at the senior level at the Massilia Gym Cup in Marseille, France. She placed fourth on floor exercise and ninth on vault.

In 2004, she was part of the U.S. team that won a gold medal at the Pacific Alliance Championship in Honolulu. Alicia Sacramone personally won an individual vault title. Despite her impressive performance that year, she was unable to make it to the American team for the 2004 Olympics in Athens after failing to qualify for an Olympic Trials.

She therefore resorted to competing in other international meets for the U.S. national team including the Pan American Individual Event Championships, winning medals for floor and vault exercise. She also took the first place at the at the World Cup Finals in Birmingham, England, beating the Olympic vault champion Monica Rosu of Romania. She continued to compete for the national team and represented in many international competitions. She was part of the American team alongside ChellsieMemmel and Nastia Liukin, for the 2005 World Championship in Melbourne, Australia, winning gold on floor exercise and third on vault.

Alicia Sacramone competed favorably at the National Championships in Boston and the Olympic Trials in Philadelphia earning her a place in the U.S. team for the 2008 Beijing Olympics Games. During the main event, she made several mistakes and was criticized by the media and other pundits for contributing to the U.S. team’s falling to a silver medal position. She admitted her flaws saying"It's kinda hard not to blame myself."She announced her retirement from the game after the Olympics.

Alicia Sacramone after a year into retirement made a comeback announcing on August 6, 2009, that she would be participating in elite competitions. However, she had a shoulder injury slowing her comeback. She came back strongly to compete in the CoverGirl Classic on July 24, 2010, placing first on both vaults and beam. She was named the USA Today's Athlete of the Week for the performance. She competed in the National Championship in August same year placing first on vault and second on beam. Her performance in the year under review earned her Sportsperson of the Year. She went on to win a gold medal on the vault at the World Championship in October.

Alicia Sacramone took her impressive performance into the 2011 winning gold on vault, tied for gold on beam with Jordyn Wieber and bronze on floor at the CoverGirl Classic in Chicago. She finally retired from the game in 2012 after failing to make it into the U.S. team for that year’s Olympics despite placing second on balance beam and vault. She to it to Twitter saying, “I leave this sport with no regrets” after she couldn’t make it to the team. Sacramone has a ten World Championships medals, making her the female American gymnast with most medals in that event. However, her record was broken by Simone Biles in 2015.

Alicia Sacramone signed as a CoverGirl spokesmodel becoming one of the first three female athletes alongside Shawn Johnson and Nastia Liukin to do that in 2008. As a member of the Team 24 Fitness, she is also a spokesperson for the company. She also briefly worked as a designer for the men fashion company, Tank Farm in 2009.

Alicia Sacramone is married to former NFL quarterback Brady Quinn since March 2014. They have a daughter Sloan Scott Quinn born on August 5, 2016. She was inducted into the Louisiana Italian American Sports Hall of Fame in, 2013 and into the USA Gymnastics Hall of Fame in December 2015.