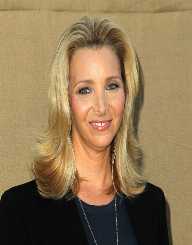 Lisa Kudrow is a recognized American actress in the face of America’s television for the role that she played in the TV sitcom called Friends. She played the role of Phoebe Buffay while featuring in the famous sitcom. She was born on July, 30th, 1963 in Encino, California. Through her recognition that she earned in the comedy series, she later landed roles in films such as Hanging Up, Analyze This, and The Opposite Sex.

Lisa Kudrow was born on July, 30th in 1963. She is the daughter of Dr. Lee N. Kudrow and Nedra S. Her mother was a travel agent whereas her father worked as a physician. Her father primarily deals with medial issues relating to headaches. She is the youngest child in a family of three. During her teen years, she was a good tennis player, and this made her part of the university’s team while studying at Taft High School in Los Angeles.

With inspirations from her father in the science field, Lisa enrolled with the Vassar College and later graduated with a bachelor’s honors degree in her favorite subject, biology.

During the early stages of Kudrow’s career, she was part of The Groundlings. She joined the group to focus on her comedic career after being inspired by Jon Lovitz who was her brother’s childhood friend and a comedian too. During this time, Kudrow was still weighing options in the entertainment industry as she had her other foot in her father’s area of expertise. She helped her father as a medical researcher. Soon, Kudrow found her way through and became one of The Groundlings members. She managed to refine her comedic skills by working with the likes of Conan O'Brien, Tim Hillman, and other improv groups, e.g., The Unexpected Company.

The beginning was tough for Lisa Kudrow as she went through several ups and downs during this entire period. She was part of the candidates auditioning for Sunday Night Live during the 90s after which she did not succeed. In 1992, however, she landed a recurring role as Ursula Buffay in the sitcom called Mad About You. Little did she know that she would be reprising the same Buffy's character on the NBC sitcom Friends later on. She co-starred by playing the role of a massage therapist called Phoebe Buffay. The TV sitcom was aired from 1994 to 2004. This was Kudrow’s breakthrough as it earned her an Emmy Award in 1998. While working with co-stars such as Courteney Cox and Jennifer Aniston, they all became the highest paid actresses as per the Guinness Book of World Records – 2005.

In addition to playing a major role in Friends, Kudrow was also earning popularity out of other films that she featured in including: Hanging Up, Dr. Dolittle 2, Analyze This, Analyze That, The Opposite of Sex and Wonderland.
Later on, in 2008, Kudrow launched Web Therapy which was a successful web series featuring some celebrities like Molly Shannon, Selma Blair, and Jane Lynch. The TV series was aired for four seasons.

In 2010, Kudrow worked as an executive producer of the NBC’s TV series named series Who Do You Think You Are? This show featured different celebrities trying to trace their family trees. She was the subject of the initial series as she later uncovered that her great-grandmother passed away in Holocaust.

Recently, in 2014, Kudrow appeared in 2014 comedy Neighbors as Carol Gladstone. Recently she reprised herself in Neighbors 2: Sorority Rising – 2016.

In 1995, Lisa Kudrow got married to Michel Stern who is a French advertising executive. This couple has one child together.