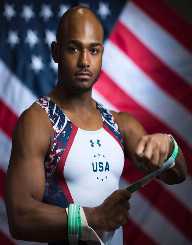 John Orozco is an American artistic gymnast. Born on December 30, 1992, he is the 2012 US national champion and competed in the 2012 Olympics. He was initially a member of the US Olympic gymnastics team for the Rio 2016 Olympic Games but an ACL injury on July 15, 2016, caused his later withdrawal from the team. He won the Junior Visa U.S. National Champion, three consecutive times in 2007, 2008, and 2009. Orozco started gymnastics at the age of eight and had great support from his parents. He began training at the gym Sutton Gymnastics in Manhattan and later at the World Cup Gymnastics.

John Orozco was born on December 30, 1992, in Bronx New York as the youngest of five children by Puerto Rican parents William and Damaris Orozco. His father worked for the New York Department of Sanitation while his mother was a homeworker. At the age of eight, he started attending gymnastic classes at Sutton Gymnastics in Manhattan. His mother supported his early sporting activities, driving him 30 miles for practices.

After graduating from high school, John Orozco started training at the United States Olympic Training Centre in Colorado Springs. He won the Junior Visa US National Championship in 2007, becoming the youngest male gymnast to qualify for the finals. This earned him a place on the US junior national team and represented the country in the Pan-American Games as an alternate.

Orozco was a three-time Junior Visa U.S. National Champion, winning it on consecutively in 2007, 2008, and 2009. He was part of the team for the Pacific Championship in 2008 and 2010, contributing to the team’s gold medal win on both occasions. He won gold medals in the All-Around and Horizontal Bar and silver medals on Pommel Horse, Parallel Bars and Still Rings at the 2010 Melbourne Pacific Rim Championships.

John Orozco graduated to the senior level by competing in the US National Visa Championships as a senior at age 17 in 2010. He sustained a torn Achilles in the right leg preventing him from finishing the competition. In 2011, he left New York to train at the United States Olympic Training Centre in Colorado Springs. While there, he joined the Senior National team for the U.S. National Visa Championships in St Paul, Minnesota.

He was also part of the US team for the 2011 World Artistic Gymnastics Championship in Tokyo, Japan, helping the team to win bronze. He turned pro after the NCAA. In 2012, he competed in the Winter World Cup in Las Vegas finishing first at the end of the competition. He followed it with a performance at the AT&T American Cup competition at the Madison Square Garden, New York in March and then won the All-Around Gold medal at Visa Championships in St. Louis, Missouri.

John Orozco was a member of the US gymnastics teams for the 2012 London Summer Olympics, where he competed in the Men’s artistic individual all-around and Men’s artistic team all-around. After the Olympics he performed at the Tour of Gymnastics Champions, tearing his anterior ligament and meniscus in his knee and had to undergo surgery.