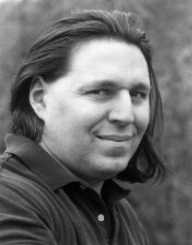 R. A. Salvatore is a pseudonym for writer Robert Anthony Salvatore, best known for his work in The DemonWars Saga and The Forgotten Realms.

Robert Anthony Salvatore was born on 20th January 1959, in Leominster, Massachusetts. He was the youngest child in the family of seven. He is sometimes known as Bob in the family. Robert Anthony received The Lord of The Rings, written by J. R. R. Tolkien as a Christmas present, sparking an interest in literary and the fantasy genre.

After graduating from Leominster High School, Robert Anthony went to Fitchburg State College to study Computers. After his Bachelor of Science Degree in Communications/ Media in 1981, he continued to study Bachelor of Arts in English.

Robert Anthony  Robert worked at a plastics company during the day, and then as a bouncer at night, while he wrote his first book: Echoes of the Fourth Magic, using his bouncer experience for battle scenes that he is famous for. Using the manuscript for his first work, Robert Anthony applied to book was published and TSR Inc, a game publishing company that released Dungeons and Dragons. Even though Robert Anthony did not manage to publish his first book, Robert won a place to write a book for the Forgotten Realms series, after auditioning with TSR. TSR published the Crystal Shard in 1988; it was part of his Icewind Dale Trilogy. It was also in this series that Robert first gains fame with his character Drizzt Do'Urden, the Dark Elf or drow. Following this, he managed to release two more books in the series: Streams of Silver and The Halfling’s Gem within two years.

Following the success of Drizzt, R. A. Salvatore gained his first hardcover novel in 1992, with The Legacy, also published by TSR. The Legacy is the first book in the series Legacy of the Drow, followed by Starless Night, Siege of Darkness and Passage to Dawn, all within four years. In 1996, Wizards of the Coast bought over TSR and retained R. A. Salvatore as Drizzt’s writer. Drizzt’s stories continued with many more series titles. Robert Anthony was commissioned to write for Star Wars Expanded Universe, starting with Vector Prime in 1999. The book is the first for the New Jedi Order series, set in the Star Wars universe. Robert also wrote Forgotten Realms: Demon Stone, a video game that was released in 2004. After that, he wrote a four book series based on EverQuest; a fantasy-themed MMORPG (Massive Multiplayer Online Role Playing Game), commissioned by CDS books.

Robert Anthony e also collaborated with Larry Hama for Devil's Due Publishing’s comic book Spooks. In 2012, Robert Salvatore worked as a creative director for 38 Studios. The game developing company that released Kingdoms of Amalur: Reckoning. Robert wrote the dialogue and backstory, and the game sold over one million copies. But he was laid off without pay after the studio went bankrupt. To date, Robert Anthony published sixty-nine books, mostly about Drizzt the dark elf. He continues to write fantasy themed fictions.

Robert Anthony met his wife before he wrote his first book. He is still living with his wife Diane Salvatore and three children: Bryan, Geno, and Caitlin in Massachusetts.