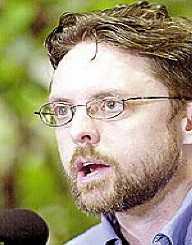 Brandon Mayfield was born on July 15, 1966. He is an American attorney practicing in Washington County. He was linked to the 2004 Madrid train bombings. He was wrongfully detained by the FBI for more than two weeks. He later sued the government, and he received an apology from the government and a two million dollars settlement.

Brandon Mayfield was born on July 15, 1966, in Oregon. He, however, grew up in Halstead, Kansas. In 1985, he joined the United States Army Reserve where he served until 1989. In 1992, he became an officer in the Army in Bitburg, Germany, a post he held for two years. In 1986, he converted to Islam after he met his wife, Mona. He later joined Washburn University and later Lewis and Clark College where he studied law. In 199, he graduated with a law degree from Washburn University.

He began his career as an attorney practicing family law in Newport. He later moved to Portland area where he worked for the Modest Means Program of the Oregon State Bar. In 2003, he was the attorney to Jeffrey Leon Battle who was among the Portland Seven. Portland Seven was a group of people who were convicted of trying to travel to Afghanistan to assist the Taliban. In 2004, he was arrested in connection to the 2004 Madrid train bombings. Fingerprints were found on a bag containing detonating devices by the Spanish National Police who shared the fingerprints with the FBI. The FBI passed the fingerprints into their database, and among twenty possible matches, one match was that of Brandon Mayfield. He became a suspect in the investigations because he had converted to Islam.

He was also a suspect because he had represented one of the Portland Seven. The FBI and the DOJ confirmed that the fingerprints were a clear match to those of Brandon. They sent their results to the Spanish authorities but the authorities disputed the match, but the FBI still insisted that Brandon was involved. They even started spying on Brandon and his family. They, however, did not disclose that the Spanish authorities matched the fingerprints to Moroccan immigrants who did not have any association with anyone in the United States. The FBI went to the extent of bugging his house without his permission. Brandon was later arrested under a material witness charge other than under a charge. The FBI refused to disclose to Brandon and his family why and where he was being detained.

He was held at a jail in Multnomah County under a false name. He was later transferred to a location unknown to no one. His family commented that Brandon had no connection with the Madrid Bombings. Brandon was released from prison after Spanish authorities confirmed that the fingerprints belonged to Algerian national Ouhnane Daoud. The case was later dismissed by a judge, and the FBI apologised for their acts. Brandon later filed lawsuits for the violation of his right to privacy. In 2006, the United States Government settled the lawsuit by awarding Brandon two million dollars. The government also issued a formal apology. In 2007, two provisions of the United States Patriotic Act were declared unconstitutional.

Brandon Mayfield is married to Mona with whom he has four kids.