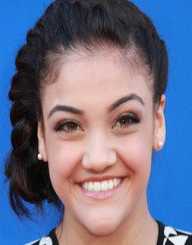 Lauren Zoe Hernandez is a skillful American artistic gymnast. Born on June 9, 2000, she was part of the US women’s gymnastics team christened the “Final Five” that competed at the 2016 Summer Olympics in Rio de Janeiro. Hernandez won two medals during the competition including silver on the balance beam and gold in the team event. Hernandez and dancing partner Val Chmerkovskiy won season 23 of Dancing with the Stars in 2016. She also featured on an episode of Stuck in The Middle in 2016.

Lauren Zoe Fernandez was born on June 9, 2000, in Old Bridge Township New Jersey, to Wanda and Anthony Hernandez. Her father is a court officer in New Jersey and her mother a social worker who served in the Army Reserves. She has two older siblings, a brother Marcus and sister Jelysa.

Fernandez showed an athletic talent at a very young age. At the age of six, her parents enrolled her in a gymnastics class. She caught the attention of Maggie Haney, who later became her coach and manager. At the age of nine, she attended the USA Gymnastic development camp. Fernandez received education from Abeka Academy High School in Old Bridge, New Jersey.

Laurie Hernandez started her elite at the US Classic in 2012. At the age of 12, she placed 11th in the junior division, qualifying to the National Championships in St. Louis. She placed 21st at the end of that competition. The following year, she competed in the WOGA Classic placing second in the all-around. She then competed in the American Classic in Huntsville, Texas, placing first on floor exercise, second on all-around and third on balance beam and vault.

Fernandez won silver in the junior all-around at the 2013 July National Championships, placing second on floor exercise and uneven bar and third on beam. She was hit with several injuries during the 2014 season. Fernandez made a strong comeback in 2015, joining the US team for the 2015 City of Jesolo Trophy, winning the junior all-around.

In 2016, Laurie Hernandez moved to the senior level making a debut at the City of Jesolo Trophy, where she won gold on balance beam, silver on vault and bronze in the all-around behind Regan Smith and Gabby Douglas. She continued with her stunning performance at the Pacific Rim Gymnastics Competition in Everett, Washington.

Laurie Hernandez made it into the US 2016 Olympic team for the Summer Olympic Games in Rio de Janeiro after a successful trial. Other team members included Madison Kocian, Gabby Douglas, Aly Raisman and Simon Biles. This team was later dubbed the Final Five. The team won gold at the Team All-Around Final. Hernandez won silver on the Balance Beam, scoring 15.333.

Dancing with the Stars

Laurie Hernandez competed on the season 23 of Dancing with the Stars with professional partner Valentin Chmerkovskiy. She became the show’s youngest winner after winning the Mirrorball Trophy. In November 2018, she joined the 25th season in Week eight, during which she participated in a trio Jive with Victoria Arlen and Valentine Chmerkovskiy.

Laurie Hernandez has made several television appearances by appearing on talk shows like Good Morning America, The Today Show, Entertainment Tonight, Access Hollywood Live, The Tonight Show Starring Jimmy Fallon, The Ellen DeGeneres Show, and Hollywood Today Live among others. Her book I Got This: To Gold and Beyond, was published on January 24, 2017.