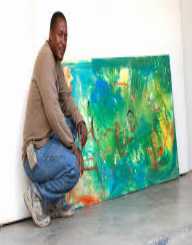 Henry Tayali was born on November 22, 1943, in Serenje, British Colony of Northern Rhodesia (an area which is presently known as Zambia). His parents were Esnati Mumba and Edward Nkole Tayali. He also had six younger siblings.

Even as a child, Henry Tayali loved the artwork. One of his favorite ways to express his creativity was through painting. Tayali and his family lived near a cultured area, and so he was surrounded by art on a daily basis. He was inspired by what he saw. Even while in high school, studying at the Mpopoma High School, he continued to paint seriously. Henry Tayali sold many pieces of his artwork during this time. He put the money earned from the sales into savings, which he would later use to attend art school.

Because of Tayali’s impressive achievements in high school, Henry Tayali was awarded a scholarship to study art by the Zambian government at the Makerere University. While at this school, he studied many forms of art including painting, sculpting, and photography. He eventually went on to graduate from this school with a bachelor’s degree in 1971. Tayali’s artwork was so impressive that he was awarded the German Academic Exchange Service Scholarship, even though he had been out of school for some time at this point. This scholarship allowed him to continue his education at the Staatliche Kunstakademie Düsseldorf in 1972. While here, he studied not only art but also other languages. He learned both German and English while at the school. He later graduated from this school in 1975.

In 1978, Henry Tayali studied in Germany again, this time at the Akademie für Bildende Künste. However, he left school before he could earn another degree.

After earning his bachelor’s degree from Makerere University, Henry Tayali began teaching at the University of Zambia, here he taught African art. He would also work as a university artist. He took a break from teaching in 1972 to continue his education in Germany; however, once he finished his education there, he returned to teaching at the school in 1975. He was extremely popular when he returned, as many people had heard of his accomplishments in Germany and they saw how impressive his art had become since he went away.

Henry Tayali was mainly famous for his paintings, which were both beautiful and thought-provoking. He was also a gifted sculptor. He has said that one of his greatest artistic influences for this kind of work was the famous Renaissance artist, Michelangelo. Even though he was inspired by artists from the past, his artwork was unique. One skill that he couldn’t have copied from an ancient artist was his brilliance in photography.

Once Henry Tayali became famous, he started traveling, showing off his artwork in exhibits. He started out in his home country of Zambia but later went on to show his art around Europe and Canada.

Some of Tayali’s most famous pieces of art are listed below.

Mother Afrika
The Beggar
Destiny
The Bull
The Graduate

Henry Tayali married Regina Birungi Kivubiro in 1971. Together, the couple had one child, Rhoderick. Sadly, the marriage ended in 1976 when Regina died. He later married a woman named Rosemary Kaluwa. This couple had two children together: Katwishi Alanda and Chaswe Angio. This marriage ended with Henry’s death.

The Henry Tayali Award, presented yearly by the Ngoma Awards, is given to an artist who can produce the best 2D artwork.