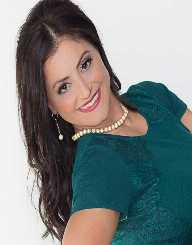 Dominique Moceanu is a retired American gymnast and author. Born on September 30, 1981, she is known as a member of the Magnificent Seven, the American gymnastics squad that won a gold medal at the 1996 Summer Olympic in Atlanta. Moceanu was a delight to watch on the balance bean with well skilled in floor exercises. At age 10, she earned her first national berth and went on to represent the United States in junior levels international competitions.

Dominique Moceanu won a silver medal at the 1992 Junior Pan American Games and at the junior national championship in 1994. In 1995, she won an all-around title at the US National Championships becoming the youngest gymnast to achieve that. She also became the first American to win the all-around gold medal during the 1998 Goodwill Games. She retired in 2000 due to injuries, and family problems made a comeback in 2005 and retired again a year after.

Dominique Moceanu was born on September 30, 1981, in Hollywood, California toDumitruMoceanu (1954–2008) and Camelia Moceanu. Both parents are Romanian immigrants. She is the eldest of three daughters with siblings and Jennifer Bricker Christina Moceanu Chapman. Her parents were a former gymnast and therefore aspired for Moceanu to become a gymnast. With this, they handed her on a clothesline to test her strength when she was a toddler. At the age of three, she had already started gymnastic classes in Illinois and later in LaFleur's in Florida. At the age of 10, she trained under Romanian coaches, Marta andBélaKárolyi in Houston, Texas. She holds in business management from

Training under Moceanu and BélaKárolyi she started participating in international competitions. In 1992, she received her firstU.S. National Team berth. She continued to the Pan American Games winning five medals in uneven bars, floor exercise, vault and all-around. In 1994, she won the junior national competition. The following year she took the senior event by storm becoming the youngest gymnast to win the USA Gymnastics National Championships.

Moceanu did not partake in the Olympic Trial for the 1996 Olympic games due to a stress fracture in the right tibia. However, on the strength of her national scores, she was made to join the team. She went into the competition still unfit with a bandaged leg. Despite the injury, she contributed to the team’s gold medal win.

After the Olympics, Moceanu competed in professional gymnastic exhibitions. Training in the family builtMoceanuGymnastics she competed in the 1997 US Nationals placing ninth. That same year she led the US team to the 1997 World Championship in Lausanne, Switzerland. She was able to qualify for the all-around, but she placed fourth and won no medal. Moceanu trained under the new coach Lumini?a Miscenco in 1998 and gained a place in the 1998 Goodwill Games. She wins an all-around title in that event becoming the only American to achieve that. She was part of the 2000 post-Olympic national tour and the 2004 post-Olympics Rock N' Roll Gymnastics Championship Tour.

Moceanu was facing recurring injuries and other issues and therefore went into hiatus until 2005 when she announced a comeback. She was however unsuccessful with the comeback and retired. She is now a part-time coach at Gymnastics World in Broadview Height, Ohio. She also gives private lessons and conducts clinics in the US.

At age 17, Dominique Moceanu filed a suit for emancipation from her parents in order to gain control over the money earned as a gymnast. In an interview, she claimed her father was wasting her money and was abusive. The court granted her wish and gained all control over her finances. She was later able to reconcile with her parents before her father’s death. Moceanu and Dr. Michael Canales, a podiatrist and former gymnast, have been married since 2006. They have two children a daughter Carmen Noel Canales and son Vincent Michael Canales.

She released her autobiography Off Balance in 2012. In it, she alleged her trainers Béla and Marta Károlyi were abusive and manipulators. She also revealed in it that she has a younger sister, Jennifer Bricker, who was born without a leg and given on adoption at birth. Bricker is also an acrobat and aerialist. On March 28, 2017, Moceanu alongside Jessica Howard and Jamie Dantzcher gave testimonies at the Senate Judiciary Committee hearing on the US Gymnast sex abuse scandal.