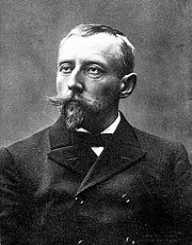 Nils Gustaf Dalen was a Swedish physicist and an entrepreneur. Born on November 30, 1869, he won the Nobel Prize in Physics in 1912, for his "invention of automatic regulators for use in conjunction with gas accumulators for illuminating lighthouses and buoys." Nils Gustaf Dalen was the founder of the AGA company and invented the AGA cooker and the Dalen light. In 1912, an acetylene explosion blinded Dalen during a test of maximum pressure for his accumulators.

Nils Gustaf Dalén was born on November 30, 1869, in Stenstorp a village of Falkopingmunicipality, VastraGotaland County. Nils Gustaf Dalen was born Anders and Lovisa Dalén. His entrepreneurial skills developed at his young age as he took over the management of the family farm, which Nils Gustaf Dalen helped to expand to include other subsidiaries like seed merchants, market garden, and a dairy. Nils Gustaf Dalen invented a milk-fat checker in 1992, which he used in checking the wholesomeness and quality of milk delivered.

Nils Gustaf Dalen showed his invention to Gustaf de Laval in Stockholm. Being impressed with the invention, entreated him to seek for basic technical education. Nils Gustaf Dalen, therefore, enrolled at the Chalmers University of Technology where Nils Gustaf Dalen received his Master’s and Doctorate upon leaving in 1896.

Nils Gustaf Dalen joined the Gas Accumulator Company (manufacturer and distributor of acetylene) as a chief engineer in 1906. After the formation of AGA in 1909, Nils Gustaf Dalen served as the managing director of the company. His time with the company saw it rise to become one of Sweden’s most innovative companies and introduced varieties of products almost every year. The company was however forced in the 1970s to limit their number of product in the market to concentrate on the production of gases for industrial use.

Nils Gustaf Dalen rose to the position of Managing Director in 1909 and changed the company’s name to Svenska Aktiebolaget Gasaccumulator (AGA). With the use of Dalen products, the AGA developed lighthouses and in 1912 moved out of Stockholm as their new production plant in Lidingo was completed.

Nils Gustaf Dalen worked with acetylene, which was a very explosive hydrocarbon gas during the initial stages of his work. Nils Gustaf Dalen later invented the Agamassan that enabled him to absorb the gas and safely store it for commercial purposes. The acetylene, therefore, became a preferred choice of fuel for lighthouse illumination over the LPG. Nils Gustaf Dalen, therefore, came out with the Dalen light incorporating the sun valve, which was also his invention. With the device, the light was only operational at the light, helping to conserve fuel and extended service life. The AGA lighthouse equipment was able to work without any other source of electric supply and was reliable.

Nils Gustaf Dalen was got blinded in 1912 by an acetylene explosion when testing the maximum pressure for the accumulators. It was that same year that Nils Gustaf Dalen was awarded the Nobel Prize in Physics. As Nils Gustaf Dalen could not attend due to his health, his brother Professor Albin Dalén an ophthalmologist at the Caroline Institute received it on his behalf. Although being blind, he continued to steer the affairs of AGA until his death in 1937. Dalen patented more than 100 of his works.