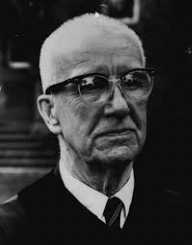 Richard Buckminster Fuller was born 12th July 1895, in Milton, Massachusetts, in the United States. His parents were Richard and Caroline Fuller.

As a youth, Fuller used to make things from materials he found when exploring in the woods. He believed this was where his interest in design started. When he was 12, Fuller invented a 'push-pull' system which he applied to propel rowboats.

He also learned to work the various pieces of equipment used in the sheet metal trade.

Richard Buckminster Fuller started his working life as a mechanic in a textile mill. He then became a laborer in a meatpacking factory.

During World War I, Fuller joined the U.S. Navy and worked as a radio operator.

After the Navy discharged him, Fuller went back to the meatpacking industry. As a result, he worked his way up, finally gaining management experience.

During the 1920s, Fuller and Hewlett's father worked together developing the Stockade Building System. They produced weatherproof, lightweight, and fireproof housing. Unfortunately, the business failed in 1927.

A historian, Barry Katz, found that Fuller suffered from depression and anxiety during this time.

When the family business closed in 1927, the Fuller's had no savings. Their second daughter was born that same year, which caused even more financial strain. Due to this, Fuller became a heavy drinker to cope with his problems.

During this time, Richard Buckminster Fuller had a vision. White light surrounded him and he was suspended several feet in the air. A voice spoke to him, and after receiving the message, Fuller re-examined his life.

Although unsure of his purpose, Fuller began to look for what it might be.

As a result, Fuller committed to thinking about how to help humanity advance in a positive way. He also became an early pioneer of sustainability and doing more with less.

In 1928, Richard Buckminster Fuller relocated to Greenwich Village. As a consequence, he spent most of his time at Romany Marie's, a popular local café. They offered Fuller a job to decorate the inside of the café, and he worked in exchange for his meals.

A friend of Marie's, Constantin Brancusi, sent Isamu Noguchi to the café in 1929. Fuller and Noguchi worked together on several projects, and they became lifelong friends.

In the summers of 1948 and 1949, Richard Buckminster Fuller taught at Black Mountain College, based in North Carolina.

Over two decades earlier, Dr. Walther Bauersfeld created the geodesic dome. Fuller continued with the work and the government awarded him with patents for the dome.

Fuller created the first geodesic dome that could support its weight without practical limits. It was 14 feet across the diameter, and it took the form of an icosahedron. He received help from the professors and students at the College to complete the work.

The U.S. government recognized straight away how vital Fuller's work was. As a result, they employed Fuller's company, Geodesics, Inc., to make domes on a smaller scale for the Marines. Several years later, there were thousands of domes all over the world.

The geodesic dome was what made Richard Buckminster Fuller famous.

Other Designs, Inventions, and Work

Over the next fifty years, Richard Buckminster Fuller developed many other designs and inventions. They were mostly for shelter and transportation that was practical and cheap.

He wrote almost 30 books, including a daily diary of his life.

In 1954, Fuller began working with architect Shoji Sadao. In 1964, they started an architectural company called, Fuller & Sadao Inc. One of their first designs was the geodesic dome for the U.S. Pavillion at Expo 67 held in Montreal.

In 1959, Richard Buckminster Fuller began teaching at Southern Illinois University in Carbondale. He started as an Assistant Professor, and he became a full Professor in 1968. He worked at the university until 1970.

Fuller took part in the first UN forum on human settlements in 1976.

Among his many awards and honors, Richard Buckminster Fuller has the following:

Richard Buckminster Fuller's wife was in the hospital dying of cancer in 1983.