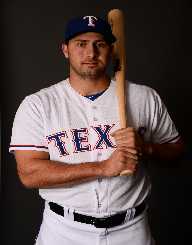 Joseph ‘Joey’ Nicholas Gallo was born on November 19, 1993. He is an American professional baseball player. He is a first baseman, left fielder and third baseman. He plays for the Texas Rangers of Major League Baseball. He is currently twenty four years old.

Joseph ‘Joey’ Nicholas Gallo was born on November 19, 1993, in Henderson, Nevada in the United States of America. He attended Bishop Gorman High School, Las Vegas in Nevada. At the school, he played baseball and was the Nevada Baseball Player of the Year when he was a senior. After he graduated from high school, he signed a National Letter of Intent to join Louisiana State University where he was to play college baseball for the LSU Tigers. Joseph started his career at a young age, and he continues playing baseball to date.

In 2012, Joey Gallo was selected by the Texas Rangers in the first round in the 2012 Major League Baseball Drafts. When he was drafted, he chose to drop joining Louisiana University and signed with the Texas Rangers for a two million, two hundred and fifty thousand dollars signing bonus. In 2013, he began his career with the Arizona League Rangers where he hit eighteen home runs and fifty two runs batted in forty three games. That year, he was named the Arizona League MVP. He later started playing for the Spokane Indians of the Class A Short Season Northwest League.

Joey Gallo also played with the Hickory Crawdads of the Class A South Atlantic League. He became the first teenager to hit forty home runs in a minor league season. His prowess in the field won him the Joe Bauman Home Run Award. In 2014, he played with the Myrtle Beach Pelicans of Class A Advanced Carolina League. He was later promoted to the Frisco Rough Riders of the Class AA Texas League. He also played in the All Star Future Games where he was named the MVP of the game. In 2015, he was promoted to the major leagues by the Texas Rangers. The year saw him earn his first ever MLB Golden Sombrero against the Kansas City Royals. He continues to play professional baseball with the Texas Rangers to date

Joey Gallo is currently twenty four years old, and he has a batting average of .205, eighty eight home runs and one hundred and eighty seven runs batted in.