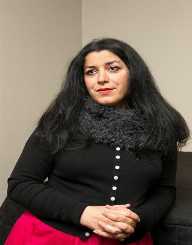 In her autobiographic novel, Persepolis, Marjane stated that Marjane Satrapi stayed with her friends throughout her high school days but also had to spend two months on the streets. Marjane Satrapi suffered near fatal pneumonia and therefore returned to Iran. While there, Marjane Satrapi studied visual communication and later earned her master’s degree from Islamic Azad University in Tehran.

Marjane Satrapi launched her career, after meeting with meeting with French comic artist, David Beauchard who served as her teacher and mentor. Marjane Satrapi gained popularity with her autobiographical graphic novel, Persepolis, which was published in French from 2000 to 2003. The book, which originally came in four parts, was translated into English in two parts in 2003 and 2004 as Persepolis and Persepolis 2. Persepolis talks about Marjane's early life in Iran and adolescent in Europe. The book won her the Angouleme Coup de Coeur Award at the Angouleme International Comics Festival.

Marjane Satrapi has also ventured into films with his work Persepolis being adapted into an animated film bearing the same name. The film, which had a French and an English version made a debut at the Cannes Films Festival in May 2007 and shared the Special Jury Prize with the Carlos Reygadas’s film Silent Light. The English version was nominated for an Academy Award for Best Animated Feature in 2008. It was very successful commercially with over a million sales in France only and won the Best First Film at the Cesar Awards in 2008. The novel Chicken with Plums was also adapted into a film in collaboration with Paronaud in 2011. She directed and acted in the crime comedy film Gang of the Jotas in 2012. Marjane also directed the comedy-horror film, Voices in 2014.

Marjane Satrapi has been married twice, first at age 21 to Reza, an Iran-Iraq War veteran. They divorced some few years after their marriage. Marjane Satrapi then married a Swedish national, Mattias Ripa. She speaks German, Swedish, English, French and Persian.