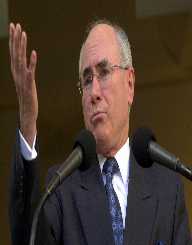 Two years on, John  Howard replaced Andrew Peacock as the of the Liberal Party and Opposition Leader, and after the party lost to the Labour in the 1987 election, John  Howard removed in 1989. He returned to leadership in 1995 and led a Coalition to victory in the federal election the following year. John  Howard subsequently became the prime minister of the country. During his term in office, John  Howard introduced new gun laws, a nationwide valued added tax, and industrial reforms. During the 2007 federal elections, the Labour Party led by Kelvin Rudd defeated took over power. John  Howard even lost his own seat during that election, becoming the second prime minister after Stanley Bruce in 1929 to suffer such defeat.

John  Howard was born to Mona (née Kell) and Lyall Howard on July 26, 1939, in Earlwood in Sydney, Australia. He was the fourth child of his parents with siblings including Stanley, Walter, and Robert. John  Howard received his early education at the Earlwood Primary School and continued at Canterbury Boy’s High School. At the high school, John  Howard representing the school in debates and was active in sports playing cricket and ruby. His father died in 1955 when John  Howard was sixteen years, and since then Mona took charge of his upbringing.

John  Howard, during his youth, suffered hearing impairment and that affected his speech. This resulted in his use of hearing aid. John  Howard enrolled at the University of Sydney where he studied law and graduated with a Bachelor of Law degree in 1961. After receiving his law degree, John  Howard practiced as a solicitor for twelve years.

After the outstanding victory, John  Howard was sworn into office as Prime Minister on March 11, 1996, for his first term. Following the Port Arthur massacre through which 35 people died, John  Howard successful championed a new gun restriction law despite strong oppositions even from within his party. John  Howard subsequent won elections in 1998 to 2000, 2001 to 2004 and from 2004 to 2007. In the election that followed on November 24, 2007, the Liberal suffered a great defeat with John  Howard losing his Bennelong seat. This made John  Howard the second prime minister after Stanley Bruce to suffer that fate.

In 1971, John  Howard married a fellow Liberal Party member, Janette Parker. The couple had three children, Melanie, Tim, and Richard. In October 2010, he released his autobiography, Lazarus Rising: A Personal and Political Autobiography.

In 2012, Queen Elizabeth II awarded John  Howard the Member of the Order of Merit. He received Presidential Medal of Freedom from President George W. Bush in 2009, Companion of the Order of Australia in 2008, Star of Solomon Island, 2005 and Commonwealth Award of Distinguished Service among several others.