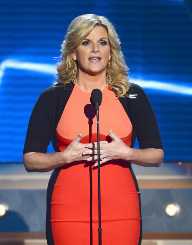 American country singer, author, and chef Trisha Yearwood was born on the 19 September 1964 in Monticello, Georgia to Jack Yearwood and Gwendolyn Paulk. As a child, she listened to country music, sang in choirs and participated in talent shows.

Trisha Yearwood was educated at Young Harris College then was a student at the University of Georgia but left without obtaining a degree.

After starting at MTM Records as an intern, Trisha Yearwood was offered full-time employment. During her time with the label, she recorded demo tapes and worked as a backing vocalist. It was around this time that she met and became friends with Garth Brooks, her future husband. She sang backing vocals on country singer Garth Brooks’s second album No Fences (1990). An MCA record producer saw her perform and she was offered a recording contract with MCA Nashville Records. She gained further exposure when she was the opening act on Brook’s nationwide tour in 1991.

Her musical career was established in 1991 when she had a number one hit with her single. She’s In Love With The Boy, from her debut album. The Academy of Country Music named Yearwood the Top New Female Vocalist in 1991

Trisha Yearwood followed this up with the critically acclaimed album, Hearts In Armor (1992). Eight more albums followed including The Song Remembers When (1993), Thinkin’ About You (1995), Everybody Knows (1996). In 1998 she had a television special: Trisha Yearwood: A Magical Night on Land and Sea.

Trisha Yearwood is also an author and accomplished chef. Her cookbook, Georgia Cooking In An Oklahoma Kitchen was published in 2008. The book was a collaboration with her mother and sister. A second cookbook, Home Cooking With Trisha Yearwood came out in 2009. On the 14 April 2012, Yearwood’s cooking show debuted on The Food Network.

Trisha Yearwood is also an actress and has appeared in JAG as well as Dr. Quinn, Medicine Woman (1994). In 2016 she was in The Passion, a television musical based on the Passion of Jesus Christ.

Trisha Yearwood won a Grammy for How Do U Live. She song was also used as the soundtrack for the film Con Air. She won another Grammy for In Another’s Eyes, which she recorded with Garth Brooks.

Trisha Yearwood was awarded a Star Guitar on the Music City Walk of Fame in 2015.

Over the years Trisha Yearwood has been involved in various charities and philanthropic activities. She has worked with the Children’s Foundation, Habitat for Humanity and numerous other organizations.

Trisha Yearwood ‘s first husband was Chris Latham (m.1987-div.1991). She then married Bobby Reynolds (m.1994-div,1999). In December 2005 Trisha Yearwood married Garth Brooks. She had originally met Garth Brooks when they were both trying to establish their music careers and had remained friends throughout the years before eventually marrying.