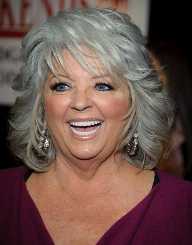 Paula Ann Hiers Deen is a famous American celebrity chef and owner of The Lady and Sons restaurant in Savannah, Georgia. Born on January 19, 1947, she is also a cooking show television host and runs the Paula Deen’s Creek House with her sons Bobby and Jamie Deen. After suffering a panic attack in her20s and being agoraphobia, Paula Deen resorted to cooking for the family to keep her from going out. This new interest will later turn into a big business. In 2002, Paula Deen started her own cooking show, Paula Home Cooking on the Food Network.

Paula Deen also premiered two new shows, Paula Party, 2006 and Paula’s Best Dishes, 2008 on Food Network. In 2013 Deenbecame a subject of controversy and lost endorsementsand deal with Food Network after she was alleged of making derogatory comments against African-Americans. She subsequently admitted using the n-word. Deen has fifteen cookbooks to her credit.

Paula Deen was born to Corrie A. Hiers and Earl Wayne Hiers Sr. on January 19, 1947, in Albany, Georgia. She has raised a Baptist and still hold on to that faith. Deen became homebound after she suffered a panic attack and agoraphobia in her 20’s. She then decided to be the cook for the family as it was something she can easily do without leaving home. With the help of her grandmother Irene Paul, she learned the hand-me-down art of southern cooking. She lost her parents beforeshe was 23 years.

At Albany, Paula Deen turned her cooking habit into a career preparing pots of chicken and dumplings for clients. After her divorce in 1989, she left Albany for Savannah with her sons. The only had $200, and that was to caterforthe children, younger brother, and herself. She has to work as a teller, selling real estate and insurance and hanging wallpaper to cater for the family. She also made meals and sandwiches for delivery by her children.

Paula Deen started a cooking business, The Bag Lady in her kitchen at home. The orders kept increasing and soon, her kitchen could not sustain the pressure and demands. In 1991, she moved to The Lady restaurant in Best West on Savannah southside on Abercorn. This was soon followedby the opening of The Lady & Sons in downtown Savannah, on West Congress Street in January 1996. The restaurant later moved to the old White Hardware building on Whitaker. Deen manages the restaurants with her two children.

Paula Deen announced her line of desert line to be retailed by Walmart in September 2009. They include the St. Louis Style Gooey Butter Cake, Old Fashioned Fudge, Dark Rum Pecan and the signature pies Apple Crunch Top. She was a co-owner of the Uncle Bubba's Oyster House in Savannah Georgia but the business closed on April 4, 2014. It was reopened as the Paula Deen’s Creek House in June 2017.

Paula Deen  published The Lady & Sons Savannah Country Cooking and The Lady & Sons Savannah Country Cooking 2 in 1997. The books contain traditional Southern recipes and others. She also has two other books co-authored by Martha Nesbit. The Cooking with Paula Deen magazine was launched in 2005. She followed it with the memoir titled “It Ain't All About the Cookin' published by Simon and Schuster in April 2007.

In 2005, Paula Deen made an acting debut in Elizabethtown. The film also starred others like Kirsten Dunst and Orlando Bloom. The premiering of the film coincided with the airing of Food Network special, Paula Goes Hollywood. She contested in Dancing with the Stars in 2015 and was eliminated at the sixth week. Paula Deen has guest starred on several shows including the Kathy Griggin: My Life on the D-List, Extreme Makeover: Home Edition, and Oprah’s Next Chapter. She was the guest judge on MasterChef in 2011 and Top Chef, 2011. Deen hosted Paula's Party (2006 - 2008) and Paula’s Best Dishes (2008-2013).

Paula Deen has married twice. She went into an early marriage with Jimmy Deen in 1965. She was around 18 years during the marriage. The coupled had two sons Jamie and Bobby. They divorced in 1989. She then married a tugboat captain in the Port of Savannah, Michael Groover in 2004. Their wedding was at the Bethesda Academy in Savannah and featured in the Food Network. She still uses (Deen)the surname of her ex-husband. She is diagnosed with Type 2 diabetes, which she made known to the public on January 17, 2012.

In 2007, Paula Home Cooking won a Daytime Emmy Award for Outstanding Lifestyle Host. Paula Deen was chosen as the Grand Marshal of the Tournament of Roses Parade in June 2007.

Paula Deen  has constantly been criticised for the use of unhealthy recipes. Most of her recipes containa high amount of salt, sugar and fat. The criticism became even more extensive after she released the recipe book Cookbook for the Lunch-Box Set, targeted at children.

Paula Deen received criticisms for the typeof recipes prescribed for children in the book. In 2011, the celebrity chef Anthony Bourdainsaid he "would think twice before telling an already obese nation that it's OK to eat food that is killing us".