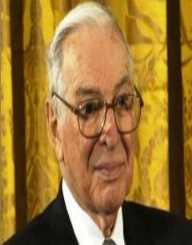 Kenneth Arrow was born on August 23, 1921. He is an American economist. In 1972, he won a Nobel Memorial Prize in Economic Sciences. He is known for his contribution in the General Equilibrium theory and Welfare Economics. He loved mathematics at the beginning of his career, but he developed an interest in economics, and so he shifted to economics. Kenneth Arrow has taught in universities such as Stanford University and Harvard University. Currently, he is the Joan Kenney Professor of Economics and Professor of Operations Research, Emeritus at Stanford University.

Kenneth Arrow served in the United States Armed City Corps as a weather officer during World War II, that is, from 1942 to 1946. Later on, he was promoted to the rank of Captain. He continued with his education by pursuing his graduation studies in Economics at the Columbia University. Kenneth Arrow also conducted research work at the Cowles Commission for Research in Economics which was affiliated to the University of Chicago. After his graduation, he worked as an Assistant Professor at the University of Chicago. In 1942, he was made an Assistant Professor of Economics and Statistics at the Stanford University. Kenneth Arrow became the Professor of Economics, Statistics and Operations Research later on at the University. He worked at Stanford University until 1968.

In 1951, he published the ‘Impossibility theorem’ which is also known as Arrow’s paradox in his book ‘Social Choice and Individual Values.’ In the same year, he presented the first and second fundamental theorems of welfare economics. He presented the theorems with proof. Kenneth Arrow collaborated with Lionel McKenzie and Gerard Debreu to develop a model that introduced modern theory of General Equilibrium in economics. In 1954, he collaborated with Gerard to introduce one of the most integral part of the General Equilibrium in economics. In 1968, he became a Professor of Economics and taught at the Harvard University.

In 1979, he went back to Stanford University as Joan Kenney Professor of Economics and Professor of Operations Research. In 1991, Kenneth Arrow went on to become Professor Emeritus at Stanford University. Some of his publications include ‘Essays in the Theory of Risk Bearing,’ ‘The Limits of Organization,’ ‘Social Choice and Individual Values’ and ‘The Economic Implications of learning by Doing’ among many other publications.

In 1957, he was presented with the John Bates Clark Medal of the American Economic Association. Two years later he was inducted as a Fellow of the American Academy of Arts and Sciences. In 1972, he was awarded the Nobel Prize in Economics along with John Hicks. In 1986, Kenneth Arrow received the John Von Neumann Theory Prize presented to him by the Institute for Operations Research and Management Sciences. In 2004, President George Bush awarded him the 2004 National Medal of Science. Two years later he was elected as a Foreign Member of Royal Society of London.

In 1947, Kenneth Arrow married Selma Schweitzer with whom he had two sons, David Michael and Andrew Seth. He has served as the president of the Econometric Society, The Institute of Management Sciences and American Economic Association during his lifetime.