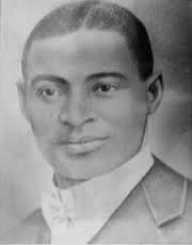 Pioneering jazz musician cornetist Buddy Bolden was born on the 6 September 1877 to Alice and Westmore Bolden in New Orleans. Bolden’s father died when he was a child, and his mother and her extended family raised him.

Early in his career, Buddy Bolden played in the Papa Jack Laine's Reliance Brass Band. Laines was one of the originators of the New Orleans sound and was a significant influence on the young musician. Bolden went on to play in other bands and by the late 1890s, had developed his style. He formed The Buddy Bolden Band, and they did gigs in the clubs of New Orleans. By 1898 and 1906 Bolden was an established presence in the music scene in New Orleans and had earned his nickname King Bolden.

In 1906, Buddy Bolden became depressed and became mentally confused. He had been having issues with alcohol abuse and was showing signs of schizophrenia. His last performance was in 1907 when Bolden appeared with the Eagle Band in the Labor Day parade in New Orleans. His behavior deteriorated after that, and he was institutionalized in the State Insane Asylum in Jackson Louisiana which heralded the end of his musical career.

Buddy Bolden was institutionalized on the 5 June 1907 and lived there for twenty-five years before his death on the 4 November 1931. He was fifty-four years of age.

Buddy Bolden has been commemorated in story and song and is recognized by many as the father of jazz. There is a status of Bolden in the Louis Armstrong Park in New Orleans.