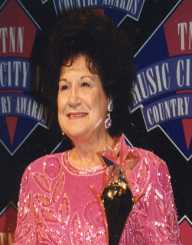 American country and western singer Kitty Wells was born Ellen Muriel Deason in Nashville, Tennessee on the 30 August 1919. She was born into a musical family.

Her father Charles Cary Deason used to play both the banjo and guitar and her mother, and Myrtle Deason was a gospel singer. At the age of 14, Wells began learning to play the guitar.

During the Great Depression of the 1930s, Kitty Wells left school without graduating and did various menial jobs, including ironing shirts.

Kitty Wells, her sisters Mae and Jewel plus their cousin Bessie Choate formed a group called the Deason Sisters in 1935. One of her first appearances was on the radio in Nashville on WSIX (1936). After her marriage to Johnnie Wright, she used to sing with Wright and his sister Louise.

Wright went on to form a successful duo with Johnnie & Jack, and Kitty Wells toured with them as a backup singer. Around this time Wright suggested that she use the stage name, Kitty Wells.

In the mid-1940s, after the end of World War II, Kitty Wells, along with Wright, joined the cast of the Louisiana Hayride, a platform for country music artists. Wright meanwhile continued as part of the Johnnie & Jack duo, and in 1952, they had a hit with Poison Love. After signing with RCA Records, Wells recorded Death At The Bar and Don’t Wait For The Last Minute To Pray but neither song did well, and she was subsequently dropped from the label (1950).

Her career was in the doldrums when she was approached by Paul Cohen to record It Wasn’t God Who Made Honky Tonk Angels. The Grand Ole Opry banned the song and for a while and Wells was not allowed to perform the song on air; but it still became a hit, selling over a million records. Once her career was established, Kitty Wells went on to record One By One with Red Foley which remained on the charts for almost twelve months. In 1959, she signed a lifetime contract with Decca Records.

By the end of the 1950s, Kitty Wells had had over thirty Top Ten hits in the Billboard country charts, and Decca Records had offered her a lifetime contract. Wells and Wright took their children with them on tour and after his partner, Jack Anglin, died in 1963, Wright involved the family which led to their own Family television show consisting of Wells, Wright, their son Bobby and their two daughters Sue and Ruby as well as Bill Phillips, a longstanding family friend. Well’s children all went on to have music careers.

Kitty Wells remained with Decca Records until 1975. She had one album with Capricorn Records, and in 1979, she formed Ruboca Records with Wright. Her last top ten solo single was Thank You For The Roses, released by Ruboca.

Kitty Wells was inducted into the Country Music Hall of Fame (1976) and received a Lifetime Achievement Award (1991). She was also recognised with the NARAS Governor’s Award for Outstanding Achievement in the Recording Industry (1981), the Academy of Country Music’s Pioneer Award (1985) and the Music City News’ Living Legend Award (1993).

Kitty Wells earned the title The Queen of Country Music and is recognised as the country singer who paved the way for future female artists such as Loretta Young and Dolly Parton.