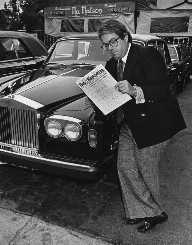 Allan Carr was born 27th May 1937, in Chicago, Illinois, United States. He was born into an American-Jewish family and was the only child. His father was a furniture dealer. Carr’s parents divorced when he was in his early teens. Allan Carr did his studies at Lake Forest College, followed by Northwestern University, which he dropped out of to start his show business career.

While still in university,Allan Carr invested $750 in the Ziegfeld Follies Broadway musical. He also invested $1250 in the 1967 production of The Happiest Millionaire. The show was not a huge success, but it gave him the leverage he needed to leave school and start his career. Allan Carr opened the Civic Theater in Chicago during the 1960s, and went on to finance several productions, which included stars such as Bette Davis, and Tennessee Williams.

He also worked behind the scenes at Playboy with Hugh Hefner. Allan Carr was co-creator of the television series, Playboy Penthouse, which was the catalyst for the launch of the Playboy Clubs. Allan Carr founded his talent agency, Allan Carr Enterprises, in 1966. His stable of stars was a who’s who of Hollywood, including: Tony Curtis, Peter Sellers, and Ann-Margret. He also produced television specials for the likes of Peggy Lee, Paul Anka, and Frankie Valli and the Four Seasons.

Allan Carr also discovered other major celebrities, including Olivia Newton-John, Mark Hamill, and Michelle Pfeiffer. Over the years, Allan Carr became renowned for the parties and promotional events that he organized. In 1975, he was hired by producer, Robert Stigwood, as a consultant for marketing and promotion. His first project was for the film version of the rock opera, Tommy. The next film he was involved with was a low-budget foreign film, which he re-edited and dubbed. In 1976, the film, Survive!, was a huge box office success, and enabled Allan Carr to have influence at Paramount Pictures.

Allan Carr’s next project for Stigwood was in 1977. It was the ad campaign and promotional event of the film premiere for Saturday Night Fever. The outcome was so spectacular and successful; he was then given the movie Grease by Stigwood in 1978. With Grease, Allan Carr once again managed the ad campaign and the film’s premiere party. He was also co-producer of the movie and cast Olivia Newton-John in the lead female role. The movie was the highest grossing at the box office for the year. Allan Carr continued to work with Stigwood on various other films.

In 1979, Allan Carr produced the film musical, Can’t Stop The Music, starring the Village People. Even though his glitzy television special for the premiere starred the likes of Cher and Hefner, his timing was out. The disco craze had just ended, so the movie was a flop. He then went on to produce Grease 2. It was nowhere near as successful as the first film, but certainly not the disaster that Can’t Stop The Music was. Allan Carr’s next production was on Broadway. He produced a musical version of the 1973 play, La Cage aux Folles, and it became a huge success. The production ran for five years with over 1700 performances. The show won three Drama Desk Awards, and six Tony Awards.

In 1989, Allan Carr was given the task of re-inventing the Academy Awards. He failed in spectacular fashion, and never regained the reputation he had previously held in Hollywood. Allan Carr went back to the theater, sponsoring several productions over the next few years. In 1998, he returned to Paramount Pictures to manage the re-release of Grease. Throughout the years, Allan Carr produced many movies, some of which included, The First Time (1969), Grease (1978), and Where the Boys Are ’84 (1984).