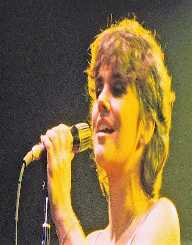 Linda Maria Ronstadt was born on July 15th, 1946. Her place of birth was in Tucson, Arizona in the United States. During the 1960s, she began her career by initially performing with folk-rock trio dubbed Stone Poneys. After her exposure, she went on solo and emerged successfully. She went on to release albums that topped the charts like Heart Like a Wheel, Living in the USA and Simple Dreams.

Ronstadt also became famous for her unique style of music because she could easily switch from rock, country, and jazz. In 2013, the singer announced that she could no longer sing because of her health condition. She had Parkinson's disease.

Linda Maria Ronstadt was born in 1946 with music all around her. His father, Gilbert, was a successful businessman. He also ran the F. Ronstadt Co. Her mother, Ruth Mary Ronstadt was a homemaker. Ronstadt’s parents taught her to play musical instruments like the guitar and ukulele. Her father taught her to play the guitar, and she loved it. She began performing with her siblings as a group of three.

Ronstadt attended Catalina High School where she met Bob Kimmel, a local folk artist. Kimmel later shifted to Los Angeles with the goal of pursuing his music career. He convinced Ronstadt to join him in his quest, but Ronstadt initially did not move with him. Afterwards, Ronstadt joined the University of Arizona. It did not take time before she quit schooling and decided to join Kimmel in chasing their dreams.

Soon, they recruited Kenny Edwards into their team and together they formed Stone Poneys. The folk team went on to release their debut album in 1967. Their second album, Evergreen Vol. 2 came in the same year, and it was more successful as compared to the first album. The Stone Poneys were majorly successful after releasing “Different Drum,” which was a single written by Michael Nesmith before teaming with the Monkees.

Linda Ronstadt had already gone solo by the time the late 60s approached. She released several albums while on her solo career. She did this with the help of backup bands. Initially, her solo career was not that successful. Nonetheless, she managed to grab herself a Grammy Award nomination after releasing the hit single "Long, Long Time" in 1971.

Things became better with her album Don’t Cry Now (1973). In 1974, Linda Ronstadt earned her breakthrough after releasing another album titled Heart Like a Wheel. Several other hit songs were on the album including "You're No Good" and "When Will I Be Loved.” This album released in 1974, earned her the first Grammy Award as she awaited the next 12 that would follow suit. Don’t Cry Now - 1973, was later considered as double platinum.

In 1975, Ronstadt released Prisoner in Disguise. The album was a hit, and it quickly climbed up to the top of the charts selling more than a million copies. This was a grand slam for her as she hit platinum in a row.

In 1977, Linda released another Simple album Dreams which would go and become more successful than Heart Like a Wheel - 1974. Simple Dreams topped the charts for up to 5 consecutive weeks. It vended over 3.5 million copies in a single year in the United States alone. This was a record for Ronstadt.

Linda’s success in her solo career gave her a reason to try out other genres of music. During the 80s, she tried out pop and jazz music. She proceeded to work with a renowned manager, Nelson Riddle. This led to a production of a string of albums in the 80s including What's New -1983, Lush Life - 1984 and For Sentimental Reasons - 1986.

In 1987, Linda Ronstadt became a major hit after collaborating with Emmylou Harris and Dolly Parton. As a team, they released an album titled Trio. This album featured some country hit songs including Phil Spector's hit track remake “The Teddy Bears" of 1958 and "To Know Him Is to Love Him." The album earned them a Grammy Award.

Late 1987, Ronstadt took another music turn and released Canciones de Mi Padre. This was an album featuring traditional Mexican music. This album later earned her an Emmy Award in 1989 for performing a show having a similar name to her Spanish album. Another multiplatinum album came through in the same year, Cry Like a Rainstorm, Howl Like the Wind – 1989.

During the mid-70s, Linda Ronstadt was romantically involved with California governor in office at that time, Jerry Brown. In 1983, she dated Jim Carrey, a comedian. They were together for only eight months. After this short relationship, she dated George Lucas, a filmmaker. They got engaged in the mid-80s. Having lacked the aspect of compromise, Ronstadt never got the chance to get married.

In 2013, after being absent from the music scene for a while, Ronstadt revealed that she had Parkinson's disease. According to her claims, it barred her from singing.

As part of recognizing her exceptional talent and a thriving career, Linda Ronstadt was inducted into Rock and Roll Hall of Fame in April 2014. In July, the same year, she made it to the White House where she was honored with National Medal of Arts by the former U.S. President Barrack Obama.