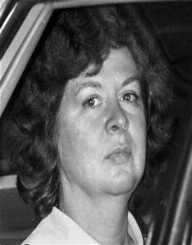 Sara Jane Moore is the woman who tried to assassinate the 38th Us President Gerald Ford.

Sara Jane Moore was born Sara Jane Kahn on February 15, 1930, in Charleston, West Virginia. She was the daughter of Olaf and Ruth Kahn and had four siblings. She went to Stonewall Jackson High School. A considerable quiet student, Moore was a music lover and loved the arts. She was an active member of the drama club and engaged in the outdoors.

She got into marriage soon after high school. Moore had a series of five failed marriages. She joined a charitable organization called People In Need or PIN. Randolph Hearst founded the organization after her daughter was kidnapped by the Symbionese Liberation Army or SLA in 1974. The SLA was a leftist organization striving to fight capitalism and establish socialism in the US. The PIN organization distributed food and other social amenities to the needy to prevail on the SLA to release Hearst’s daughter.

SLA accused Randolph Hearst of a series of social crimes. To appease the Sla, Hearst let the socialist elements run PIN. As the bookkeeper, Sara Jane Moore became increasingly aware of the socialist tenets propagated by the SLA. For her professionalism in her work, she gained the personal trust of Randolph Hearst.

Moore got recruited by the FBI as an informant. She became an activist within leftist political circles. She informed the FBI of all the activities, hierarchy and other operations of the socialist groups. After a while, she became a double agent. She notified the FBI of the actions of the leftist elements while passing on information of the agents to the leftist groups.

On September 22, 1975, Sara Jane Moore staged her execution plot. She waited for the presidential entourage in San Francisco. She posed as a bystander with other citizens near the St. Francis Hotel. When the president appeared, she fired her revolver and narrowly missed. She was accosted by the Secret Service and disarmed. President Ford survived another attempt on his life barely 17 days after another attempt by Lynette Fromme.

Ironically, Moore had informed the San Francisco Police that she wanted to test the effectiveness of the Secret Service. She was taken in by the Secret Service and released a day before the attempt. A bystander and former US Marine officer Oliver Sipple wrestled her to the ground. The Secret Service confiscated her gun and left her to the FBI. She bought a new weapon in the morning of the real day and carried out her threat.

Sara Jane Moore later confessed that she tried killing the president to prove her allegiance to the leftist movement. She believed that the death of the president would trigger a leftist revolution and benefit the poor masses. Apart from the relief that the president was not killed, Moore shocked the entire nation. She was a charming and quiet personality in front of many. Many wondered how she carried out the planning and actual shooting at the president.

Sara Jane Moore was tried and pleaded guilty of the assassination charge in 1976. She was sentenced for life imprisonment with a possibility of parole. In 1979 she broke out of prison and captured soon after in West Virginia.

Eligible for parole in 1985, she was denied that right due to her escape attempt in 1979. She was eventually freed on December 31, 2007, at the age of 77. She was released under federal laws that compelled the authorities to free anyone who has served 30 years and is of good behavior.

Moore came out of prison after the death of President Ford. He died on December 26, 2006, when she was still in prison. After her release, Moore confessed that she was wrong in her motive.

Sara Jane Moore keeps on giving interviews on her life with the leftist movements. She also provides details of how she became a devotee of socialist ideas. Moore changed her heart while in prison after realizing that violence was not the way to solve a political cause.

A book titled Taking aim at the President by Geri Spieler was published in 2009. The autobiography of Sara Moore came out more than 34 years after the assassination attempt. Spieler and Moore later separated after a spat. They differed about the way Moore was giving out her interviews on the media.

Moore is also immortalized in a musical story titled Assassins, and another song titled The Gun Song. Moore continues to elicit contrasting emotions in the US, as the only woman to shoot at a US President.