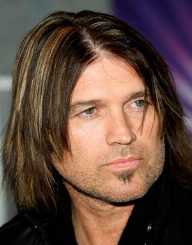 Billy Ray Cyrus is a brilliant country musician renowned for the album, ‘Achy Breaky Heart’ and is well-known for his father role in Disney’s Channel, ‘Hanna Montana,’ He has also acted as Verton Brown mule on CMT sitcom, ‘Still the King.’

Billy Ray Cyrus is a son of parents Ron Cyrus and Ruth Ann Costo born on August 25, 1961, in Flatwoods Kentucky. Cyrus took an interest in music at the age of four and later attended Georgetown College on a baseball scholarship, however, he dropped out to pursue music. In 1980’s he formed a band called, ‘Sly Dog’ which he named after his one-eyed dog.

In 1990, Billy Ray Cyrus signed with Polygram / Mercury and begun to write his music following the debut of his album, ‘Some Gave All’ in 1992. This album garnered commercial and charted success. He debuted as number one on the Billboard Top Country albums, in Canadian Country Albums Charts and other several foreign countries.

Notably, the album featured other 40 hit singles on the Hot Country Chart from 1992-1993. The most successful single, ‘Achy Breaky Heart’ reached number one on the Hot Country Songs and a hit ranking number 4 on the Billboard Hot 100. Other songs included, ‘Could’ve Been Me’ that ranked number 2, ‘Wher’m I Gonna Live?’ that reached number 23 and ‘She’s Not Crying Anymore’ at number 6. The album sold over 20 million copies across the United States in 1996.

Billy Ray Cyrus released his second album,’ It won’t be the Last’ which featured four singles with their making to the top 40. The album had success on the charts including, No. 1 on the Country Charts and No.3 on the Billboard 200. The singles also charted with ‘In the Heart of a Woman’ ranking No.3, ‘Somebody New’ charting No. 9, ‘Words by Heart’ at No. 12 and ‘Talk Some’ ranking No.63.

In 1993, Cyrus appeared in Dolly Parton’s single, ‘Romeo’ which reached 27 in the country’s chart list with a favorite video on CMT. The following year, Cyrus released his third album, ‘Storm in the Heartland’ his final record with PolyGram. This album reached No. 11 on Country’s top 40 of the Country Singles chart, and managed to be certified Gold in the U.S. His singles, ‘Deja Blue’ ranked No. 66 while ‘One Last Thrill’ did not make the chart list at all.

In 1994, Billy Ray Cyrus contributed the song ‘Pictures Don’t Lie’ to the AIDS benefit album. Two years later, Cyrus released his most critically acclaimed album, ‘Trail of Tears’ on Mercury Records. This album debuted at No. 20 on the Country’s Chart.

After leaving the Mercury Records, Cyrus signed with Monument Records and released an album titled, ‘Southern Rain’ in 2000. The album debuted at No. 13 on Country Albums and No. 102 on Billboard 200. The singles also charted as follows, ‘You Won’t Be Lonely Now’ ranking at No. 17, ‘We the People’ at No. 60, and ‘Crazy ‘Bout You Baby’ at No. 45.

Billy Ray Cyrus began to record Christian music with his first album release in 2003 titled,’ Time Flies’ and ‘The Other Side.' The album peaked at No. 56 on Country album charts with only one single, ‘Back Memphis’ charting at No. 60.

Additionally, he filmed his second Christian album, ‘The Other Side’ that debuted at No.5 on the Top Christians Albums, No. 18 on Top Country Albums chart and No 121 on Billboard 200. His two out of the three singles also charted with, ‘Face of God’ ranking at No. 54, and ‘The Other Side’ at No. 45.

With the Disney Entertainment, Cyrus released the album ‘Wanna Be Your Joe’ that made it at No. 4 on Country Charts and No. 113 on all-genre charts. He also made a duet with his daughter Miley Cyrus.

In 2006, Billy Ray Cyrus made a performance with a metal-rock band known as ‘Metal Skool’ with songs such as, ‘Rebel Yell’ and ‘I Want My Mullet Back.’ The same period, he sang at Game 5 of 2006 World Series, ‘The Star-Spangled Banner’ in St. Louis.

In Mid-2007, he competed with ‘Dancing with the Stars’ show where he danced with Karina Smirnoff and finished in the 5th place. Additionally, he released his new album, ‘Home at Last’ followed by a duet performance with his daughter Miley that emerged top 5 on Billboard Chart.

In 2008, Billy Ray Cyrus released his single, ‘Somebody Said a Prayer’ followed by ‘Back to Tennessee ‘that played in ‘Hanna Montana: The Movie.’ And ‘A Good Day.’ He also made a duet with Miley titled, ‘Butterfly Fly Away’ that emerged No. 56 on Billboard Hot 100 and N0. 50 on Canadian Hot 100.

Alongside his daughter, Miley, they sang ‘Good Morning America,’ and Cyrus formed a band named, ‘Brother Clyde’ and released a single, ‘Lately.' However, he suspended the group in 2010, and released singles, ‘Runway Lights’ and ‘I’m American’ in 2011.Another single, ‘Nineteen’ charted at No. 58, on Hot Country Songs. MIn 2012, he released the album, ‘Change My Mind.’

Billy Ray Cyrus married Cindy Smith in 1986 and divorced in 1991. On December 28, 1993, he married Leticia, and they have three children, Miley, Braison and Noah Lindsey. They have also adopted two children, Brandi and Trace. Cyrus also has a son Christopher Cody from his former relationship with Finley.