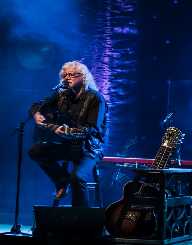 Arlo Guthrie had a sister, Nora who became a record producer. He studied at Stockbridge School in Massachusetts, and he graduated in 1965. Arlo Guthrie then spent a year in London, where he met Karl Dallas who introduced him to the folk-rock scene and became a lifelong friend.

When Arlo Guthrie was 18, he was arrested for illegally dumping on private property due to the local dump being closed for a holiday. This incident would become the basis of Arlo Guthrie's most famous work, a talking blues song called Alice’s Restaurant Massacree, which lasted over 18 minutes. The song secured Arlo Guthrie his first recording contract. The song became iconic on counterculture radio stations and college campuses. A movie depicting the true story behind the song, called Alice’s Restaurant, was released in 1969. Arlo Guthrie ’s next huge success was with a song called City of New Orleans. He followed this with a song called Coming into Los Angeles but only had minor success with this one.

Arlo Guthrie  performed for the first time with his band, Shenandoah, in 1975, when they did a benefit concert in Massac husetts. They recorded and toured from the 1970s through to the 1990s. Arlo Guthrie  has also done acting over the years, with minor roles in over 35 movies and television shows. He released 29 soundtracks between 1967 and 2009, including Alice’s Restaurant (1967), Washington County (1970), and Mystic Journey (1996).

Arlo Guthrie was awarded the Peace Abbey Courage of Conscience Award in 1992.

Arlo Guthrie  married Jackie Hyde in 1969. They were still together in 2012 when Jackie died of cancer. Arlo Guthrie has three children, a son and two daughters, who have all followed him into the music industry.