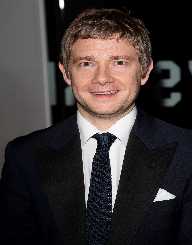 Martin Freeman was born on the 8 September 1971 in Aldershot, Hampshire, England to Geoffrey and Philomena Freeman. He has four older siblings, a sister, and three brothers, and is of English-Irish ancestry.

Martin Freeman was educated at Salesian School, a private Catholic school located in Chertsey and Brooklands College. He then studied drama at the Central School of Speech and Drama in London.

Starting his career in 1998, Martin Freeman has appeared widely on television and in the film. In 2001, Freeman had a breakthrough playing Tim Canterbury in the British sitcom The Office. He also appeared in the romantic hit comedy Love Actually (2003) and The Hitchhiker’s Guide to the Galaxy (2005).

Martin Freeman was already well-established as an actor when he rose international prominence portraying Bilbo Baggins in The Hobbit, Peter Jackson’s trilogy based on the J.R.R. Tolkien’s book of the same name. Other work includes playing Watson in the television series Sherlock (2010), crime-comedy Fargo (2014) and Dr. Watson in Sherlock (2010-2017).

Martin Freeman is a keen squash player and as a young person played in the national squash team in the UK.