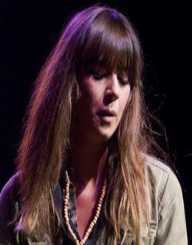 Charlyn Marie Marshall famously known as Cat is an American musician, songwriter, actress, and model. She was born in Atlanta, Georgia, the U.S on January 21, 1972. She adopted the name Cat Power as her stage name from her former band. She began singing in the early 1990s in local pubs around Atlanta. She later did her first two albums in 1994 collaborating with Steve Shelley of Sonic Youth and Tim Foljahn of Two Dollar Guitar.

‘Dear Sir’ was released in 1995, and ‘Myra Lee’ came a year later in 1996. She released her third album ‘What Would the Community Think’ in 1996 from Matador Records. She gained widespread recognition and acclaim with the 1998 ‘Moon Pix’ which was followed by ‘The Covers Record’ in 2000 and several others. She has a taste of music from genres like Indie rock, folk rock, electronic blues, alternative rock, lo-fi and sadcore. She is a skilled vocalist, guitarist and also plays the piano. Her active years run from 1992 to date.

Charlyn Marie Marshall was the second born child to blues musician Charlie Marshall and Myra Lee Marshall. She was born in Atlanta, Georgia on January 21, 1972. In 1979, her parents separated, and her mother was married to a religious man who made the family travel often. Marshall’s education was occasionally disrupted as she had to change schools everytime they moved.

She went to ten different schools and once in a while was left under the guardianship of her grandmother. She loved music and often listened to her parents’ musical records which were the source of her inspiration. She nicknamed herself Chan while in sixth grade, the name she adopted later in her profession. For a time she never saw her mother for about seven years until she was twenty four.

Cat Power began her career as a guitarist as she taught herself how to play the guitar she bought.  She played music in a basement in Atlanta alongside musicians Glen Thrasher, Marc Moore, Damon Moore, and Fletcher Liegerot.  After weeks of playing, they were called to perform in a show and had to establish the name of the band.

Cat Power became the name of the band which Marshall adopted from the words ‘Cat Diesel Power’ she saw on a cap worn by one of her customers. However, the band had no artistic ambitions but rather played for social interests. She went to New York in 1992 accompanied by Glen Thrasher who introduced her to jazz music.

Her first two recorded albums included ‘Dear Sir’ and ‘Myra Lee’ which were recorded in 1994. Following was her 1996 third album ‘What Would the Community Think’ which she recorded at Matador Records. She recorded her fourth album ‘Moon Pix’ in 1997 in Melbourne, Australia in collaboration with musicians Mick Turner and Jim White of the Dirty Three Australian band.

Cat Power took a break from recording music until 2003 when she released ‘You Are Free’ which was numbered 105 in the Billboard 200. In 2007, her seventh album ‘The Greatest’ was recorded and released in Tennessee and was rated 34 on the Billboard 200. This new album earned her the 2006 Shortlist Music Prize becoming the first woman to receive the prize. Other albums she released in subsequent years include ‘Jukebox’ (2008), ‘Sun’ (2012), ‘Wanderer’ (2018).

Cat Power was in love with Daniel Currie from 2001 and separated in 2003 due to her irresponsible habits of substance abuse. In 2009, she relocated to Los Angeles to live with her boyfriend in Silver Lake, California. Much is not said about her later boyfriend, but Marshall was also in a relationship with actor Giovanni Ribisi from 2006 and called it quits in 2012. She has a fourteen year old daughter.