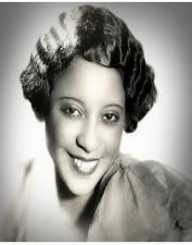 Adelaide Hall was an American singer who also performed in the United Kingdom. Hall’s musical career spanned for over 8 decades from the 1920s until the 1990s.

Adelaide Hall was married to Bertram Errol Hicks. Not much is known about Hicks, what is known is that he married Hall in 1923 and that he was a seaman who was a native of Trinidad and Tobago. Hicks and Halls did not have any children together, but he was present with Hall throughout her life until he died in 1963.

Born on October 20, 1901, as Adelaide Louise Hall, she was the elder sister of the two children of Elizabeth Gerard and Arthur William Hall. Born in Brooklyn, New York, she has a younger sister named Evelyn who attended Pratt Institute where their father worked and taught the piano.

At a young age, both children were exposed to music wherein young Evelyn slowly drifted towards singing while her sister Evelyn focused on playing the piano. This started the girls’ piano-vocal duo whereon they performed at church and other local events.

Tragedy struck in 1918 and put an end to the duo when Evelyn caught the Influenza and succumbed to the disease and their father too died shortly after. The young Hall had no choice but to look for employment to support her mother and herself.

Adelaide Hall was able to land her first singing gig in 1921 wherein she was selected to sing in Broadway the chorus part of the musical hit Shuffle Along. From there, she appeared in several musical performances that consist of African-Americans such as the 1923 Broadway production of Runnin’ Wild wherein she sang Old-Fashioned Love.

In 1925, Hall went on a European tour with The Chocolate Kiddies of which they sang music composed by Duke Ellington. A year later in 1926, she appeared in the Broadway musical entitled My Magnolia as well as Tan Town Topics.

Adelaide Hall cemented her mark on history when she worked alongside Duke Ellington and made the worldwide hit Creole Love Call. This collaboration led both of them to stardom and they also worked on other hits such as Chicago Stomp Down, and The Blues I Love to Sing.

Adelaide Hall, her mother, and her husband settled in a New York estate in the suburbs but her white upper-middle-class neighbors explicitly expressed their antagonism towards her, which in the end, made Hall and her family relocate to Paris in the mid-1930s.

Despite being in a new location, she became an overnight sensation and she worked alongside Django Reinhardt, Chevalier, and Josephine Baker. Soon enough, the couple established their club.

Adelaide Hall also participated in the film industry wherein she made her debut in the film The Thief of Baghdad in 1940. In the film, she played the role of a nurse who has a small singing part in the film but the small exposure led to great heights for Hall.

During the Second World War, Hall joined the uniformed entertainment corps wherein she continued performing alongside her allies. After the war, she returned to England to record new work wherein she collaborated with Cole Porter on the 1957 hit Kiss Me, Kate. She also returned to the US to work with Lena Horne on the Broadway production of Jamaica.

Adelaide Hall made her last public appearance in 1992 when she attended the British Academy Award of Songwriters, Composers, and Authors wherein she received the Gold Badge Award. Before attending this award show, she also performed in Carnegie Hall for the Cabaret Comes to Carnegie series also held in the same year.

Adelaide Hall died at the age of 92 on November 7, 1993, in Charing’s Cross Hospital in London, England. Her interment took place at the Cathedral of the Incarnation in New York City as per her request wherein she was also laid to rest at the Cemetery of the Evergreens in Brooklyn, beside her mother’s final resting place.