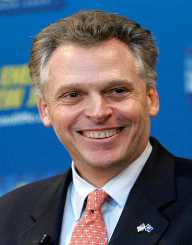 Terence Richard McAuliffe is a Democratic American politician and entrepreneur. Born on February 9, 1957, he was the 72nd Governor of Virginia serving from 2014 to 2018. From 2001 to 2005, he was the chairman of the Democratic National Committee. McAuliffe served as the co-chairman for the re-election campaign of President Bill Clinton in 1996 and the chairman of Hilary Clinton’s presidential campaign in 2008.

Terence McAuliffe was born on February 9, 1957, in Syracuse, New York to Mildred Katherine Lonergan and Jack McAuliffe. His family was of Irish ancestry. His father was a real estate agent and local Democratic politician. McAuliffe received education at Bishop Ludden Junior/Senior High School, where he graduated in 1975. He then enrolled at The Catholic University of America, earning a bachelor’s degree. McAuliffe took after his father’s political interest and after graduating from the university served in President Jimmy Carter’s re-election campaign. He became the national finance director at the age of 22. After the campaign, he enrolled at the Georgetown University Law Centre, receiving his Juris Doctor degree in 1984.

Terence McAuliffe was business oriented from childhood, starting his first business McAuliffe Driveway Maintenance, sealing driveways, and parking lots at the age of fourteen. He later earned wealth as a banker, hotel owner, real estate developer, internet venture capitalist, and homebuilder. He helped to found the Federal City National Bank in 1985, becoming the board chairman of the bank in 1988 at the age of 30.

Terence McAuliffe has stakes in several businesses including purchasing American Heritage Home, a Florida-based home building company with his business partner Carl Linda. They were able to initiate a plan that revamped the company, which was on the verge of collapse. He founded the GreenTech Automotive, a holding company in 2009. One year later the company purchased Chinese electric car company EU Auto MyCar for $20 million.

Terence McAuliffe entered politics at the age of 22 when served as the finance director of President Jimmy Carter campaign. During this period, he once had to wrestle an alligator to earn a $15,000 contribution towards the campaign. He gained credibility as a renowned fundraiser. He became one of the fundraisers of the Democratic Party.McAuliffe became very close with the Clinton family. During the re-election campaign of Bill Clinton in 1996, McAuliffe and his staff managed to raise $275 million towards the campaign causes. He also chaired fundraising with the Clintons in 2000, raising a fundraising record of $26.3 million. He was the co-chairman of the 2008 presidential campaign of Hillary Clinton.

Terence McAuliffe became the Democratic National Committee Chairman in 2000, serving until 2005. In this position, he achieved a fundraising record by raising $578 million. During his tenure, the DNC refurbished its headquarters and what is known as Demzilla, a computer database of more than 170 million potential voters.

Terence McAuliffe hoped to contest in the gubernatorial election in 2009 for the governorship of Virginia but lost in the Democratic primary by placing second. His rivals during the primary were State Senator Creigh Deeds and former Virginia House of Delegates Minority Leader, Brian Moran. In 2013, he ran unopposed as the Democratic nominee for the Virginia governorship.

Terence McAuliffe won the primary elections defeating Republican nominee Ken Cuccinelli and Libertarian Robert Sarvis. He gained 47.8% of the vote; Cuccinelli had 45.2%, and Sarvis receiving 6.5%. He took the oath of office on January 11, 2014, and his tenure ended on January 2018. As a governor, he joined the lawsuit Aziz v. Trump, to challenge President Donald Trump’s immigration executive order. He supports same-sex marriage.

In 1988, Terry McAuliffe married Dorothy Swann, the daughter of his business partner, Richard Swann. The couple has five children. In 2007, he released his memoir What a Party! My Life Among Democrats: Presidents, Candidates, Donors, Activists, Alligators, and Other Wild Animals alongside Steve Kettmann.