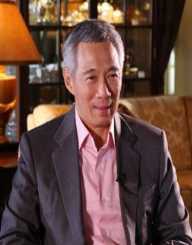 Son of former Singaporean prime minister Lee Hsien Loong was for on the 10 February 1952.

Lee subsequently went to Cambridge University where he studied mathematics and graduated with first-class honors in 1974. While at Cambridge he also studied computer science. In 1978, Lee did the US Army Command and General Staff Course at Fort Leavenworth, Kansas. Then in 1979/1980 he attended the Kennedy School of Government at Harvard and obtained a Master of Public Administration degree.

Although Lee Hsien Loong had won the SAF scholarship to study at Cambridge, he only joined the Army in 1974, where he was appointed to an artillery division. He was made a commanding officer of the Artillery Gun Battalion (1980). Then Lee rose through the ranks quite quickly. Assistant Chief of the General Staff (1981) to Brigadier General (1983). He resigned in 1984 and entered politics.

As a member of the People’s Action Party, Lee Hsien Loong was elected to parliament and subsequently, appointed political secretary to the Minister for Defence. In January 1985, Lee was Minister of State which included defense as well as trade and industry. In this role, Lee chaired the special Economic Committee which was looking into the current state of the economy. Lee showed his political style of leadership which was an inclusive, consultative attitude. The economic committee was a success. The report's recommendations helped the government to deal with the recession.

Appointed as acting minister for trade and industry in 1986, Lee continued with his other roles. He was made Chairman of the PAP Youth Wing. January 1987 saw Lee appointed as Minister for Trade and Industry and Second Minister for Defence services. In 1989, he was appointed Second Assistant Secretary General of his party’s Central Executive Committee. In 1990 he was elected as one of the two deputy prime ministers.

Lee was expected to be Singapore’s next prime minister, after Goh Chok Tong; unfortunately, Lee fell seriously ill. In 1993, he underwent chemotherapy and was given the all clear in April 1993. Lee returned to work, and in 1997, his party won 81 of the 83 seats in the Singaporean parliament.

In 2004, Lee Hsien Loong was sworn in as Singapore’s third prime minister. One of his first acts as prime minister was to announce his Five Day Work Week, which removed working half a day on Saturday. These changes were implemented in January 2005. Lee also promoted paid maternity leave, advocating a two month period of leave for mothers of newborns. This was partly due to the falling birth rate in Singapore.

When Lee introduced a S$2.6 billion bonus shortly before the General Election of 2006, he was accused of pork barrelling. The gift offered comprehensive assistance to all of the Singaporean society and was implemented in May 2006. Lee’s People’s Action Party won 66.6% of the vote, gaining 82 seats out of 84. Lee’s party won comfortably in the 2011 election; and in 2015, the PAP won again taking 83 out of 89 seats. He is the current Prime Minister of Singapore.

Lee Hsien Loong is a Buddhist by birth, he attended a Catholic school, and his late father is on record as saying that he was agnostic. In 2009, Lee spoke out in favor of religious tolerance and inclusiveness on the island of Singapore where people practice some different religions.

After about of lymphoma in 1992, Lee recovered his health. Then in 2015, he underwent surgery for prostate cancer and has since been given a clean bill of health.

One of Lee’s hobbies is computer programming.

In 2014, Lee Hsien Loong sued political activist Roy Ngerng over a blog posting which accused Lee of the misappropriation of funds. Ngerng raised S$112,000, but he lost the case and was ordered to pay Lee S$150,000.

Lee Hsien Loong and two ex-prime ministers of Singapore, Lee’s father Lee Kuan Yew and Goh Chok Tong took exception to an article in the NY Times company owned newspaper the International Herald Tribune. The article entitled All In The Family appeared on the 15 February 2010. The insinuation in the article was that Lee had won his position in politics due to his father’s political influence and not on merit. The New York Times Company and the journalist who penned the article ordered to pay US$114,000 plus costs. The amount awarded to Lee was SG$50,000.