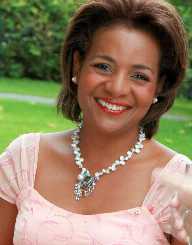 Michaelle Jean was born on 6th September 1952, to Roger and Luce Jean. Michaelle Jean's father was the principal, as well as a teacher, at a private Protestant school and her mother was also a teacher. Whilst Michaelle Jean was doing her schooling; all school children were required to swear allegiance to the Haitian president and dictator, Francois Duvalier. Her parents didn’t want her to do that, so Jean was schooled at home.

In 1965, Michaelle Jean's father was arrested and tortured by the government of the day, run by Duvalier. In 1967, her father fled to Quebec, Canada. The family followed sometime later. Her parents separated shortly after that, due to her father’s increasing violence, an after effect of his arrest.

Michaelle Jean moved to Montreal with her mother and sister. She attended the University of Montreal and graduated with her Bachelor of Arts in Italian and Spanish. She went on to begin her Masters in Comparative Literature and won herself three scholarships which enabled her to attend University throughout Europe, in Perugia, Florence, and Milan.

During her period at university, Michaelle Jean was also an activist against domestic violence, working with shelters for battered women. This was the beginning of her setting up a network of women’s’ shelters across Canada. In 1988, Michaelle Jean joined Radio-Canada. Her roles were diversified, being a journalist, film maker, and reporter. She hosted several news and current affairs programs, including Actuel, Montreal ce soir, and Virages.

In 1995, still with Radio-Canada, Michaelle Jean moved to their all-news channel, Reseau de I’information (RDI). She anchored several programs on the new channel. By 2004, Jean head her own show, titled “Michaelle.” She continued to anchor other programs at the same time.

During the same period, Michaelle Jean also made several movies with her husband, and produced and hosted several news and documentary proMichaelle Jeangrams for both English and French CBC. From 2005 to 2010, Michaelle Jean became Governor General of Canada. Rumors and innuendo plagued her, with controversial reports that she  was in favor of Quebec’s independence. Michaelle Jean denied all claims.

In 2010, Michaelle Jean was named as UNESCO’s special envoy to Haiti. In 2012 to 2015, she became Chancellor of the University of Ottawa. Michaelle Jean then went on to run the Organization Internationale de la Francophonie, a position she took up in 2015. It is a four-year tenure which she is currently serving, once again promoting the rights of women, along with democratic procedures in some of the African countries.

Michaelle Jean is well known for working diligently during her term as Governor General, on behalf of women affected by domestic violence.

In 1991, Michaelle Jean traveled to the Caribbean for work, and it was there that she met Jean-Daniel Lafond. The couple went on to marry and adopted a daughter named Marie-Eden. Lafond was a Canadian film director, born in France.

In 2010, Michaelle Jean created the Michaelle Jean Foundation which was to help underprivileged youth in northern and rural Canada. The Universities Fighting World Hunger International network, launched a new award in 2011, called the Michaelle Jean Award. The award is for students who are recognized for their work against hunger in emergency relief situations.

Between the foundation, the award, and all the hard work done fighting against domestic violence, Michaelle Jean's legacy will be remembered in years to come.