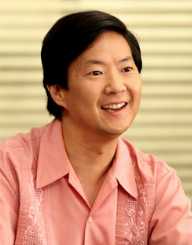 Comedian, actor, and physician Ken Jeong was born Kendrick Kang-Joh Jeong is a Korean-American who was born on the 13 July 1969 in Detroit, Michigan. He was raised in Greensboro, North Carolina.

Ken Jeong's high school education took place at Walter Hines Page High School, and he graduated in 1986. Jeong then enrolled at Duke University (1987-1990) and went on to the University of North Carolina, Chapel Hill School of Medicine (1990-1995) where he obtained his M.D. Jeong is a licensed physician who did his medical residency in New Orleans at the Ochsner Medical Centre.

In 1995, shortly after obtaining his medical degree, Ken Jeong won the Big Easy Laff-Off and was encouraged to move to LA to try and break into the comedy circuit. He moved to LA and worked as a medical doctor but also performed at various comedy clubs. He started appearing on television including in Larry David’s Curb Your Enthusiasm, The Office and HBO’s Entourage.

After playing Dr. Kuni in Knocked Up, which was his breakthrough role, Ken Jeong decided to concentrate on acting. Work started to flow, and he was in Pineapple Express, Role Models, All About Steve, The Hangover Part II and III, Zookeeper and Transformers: Dark of the Moon. He was also in the NBC Sitcom Community in 2000. Jeong shot to fame playing Ben Chang in the NBC sitcom Community (2009). He also starred in The Hangover (2009) trilogy, playing a gangster.

Ken Jeong married Tran Ho, who of Vietnamese-American heritage, in 2004.  The couple has two twin daughters, Alexa and Zooey. Ho is also a medical doctor. His wife was supportive when he decided to change from the medical profession to a career in acting.