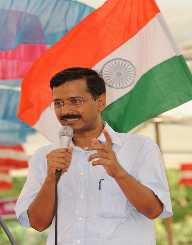 Arvind Kejriwal is a civil rights leader from India. He is part of-of the fight against government corruption.

Arvind Kejriwal was born on August 16, 1968, in Siwani, India. His parents are Gobind and Gita Kejriwal. Gobind was an electrical engineer while Gita was well-educated. Due to the nature of his father's job, Arvind Kejriwal and his family often moved from place to place. He enjoyed reading and spending time on his own.

Arvind Kejriwal attended Campus School in Hisar before transferring to the Christian missionary school in Sonipat. He later attended the Indian Institute of Technology in Kharagpur to study mechanical engineering.

After graduation, Arvind Kejriwal chose not to follow the same path as many of his peers who went abroad for work. Among the job offers he had in India, he pursued a career with Tata Steel. Arvind Kejriwal started his training program in 1989 and was later promoted to assistant manager in Jamshedpur. When he became bored with his career path, he quit his job and took the Civil Service Examination.

While he waited for the exam result, Arvind Kejriwal chose to volunteer his time and services. He worked with Mother Teresa at Kalighat Ashram, the Christian Brothers Association, Nehru Yuva Kendra, and Ramakrishna Missions. After the Civil Service Examination results were tallied, Arvind Kejriwal became an official for the Indian Revenue Service in 1995. Even though he was ready to provide a service as part of the government, he became frustrated with the corruption that the entity was associated with.

While working with the Income Tax Department in 1999, Arvind Kejriwal founded Parivartan. He helped the people of Delhi with income tax, electricity, and food rations while uncovering a ration card scam. Rather than remain a Joint Commissioner of Income Tax in New Delhi, Kejriwal left civil service in 2006.

Later in 2006, Arvind Kejriwal founded the Public Cause Research. His message gained a stronger voice when he worked along with another social activist named Anna Haraze. They were both working to pass the Jan Lokpal bill. The bill would allow an independent body to investigate corruption cases in Delhi. In 2012, Arvind Kejriwal started his political party called the Aam Aadmi Party. As he gained popularity in his fight against corruption, he was able to win the 2013 Delhi Legislative Assembly election and become Chief Minister.

As it was, Arvind Kejriwal resigned after 49 days with the knowledge that his party would not be able to pass the Jan Lokpal bill at their current size. The Aam Admi Party tried again in 2015 and won a strong majority of seats in the Delhi Assembly. Kejriwal once again became the Chief Minister of Delhi.

Arvind Kejriwal married Sunita in 1994. The couple has two children.

In his efforts to fight government corruption, Kejriwal established the Aam Admi Party and was able to bring the Jan Lokpal bill to the parliament.