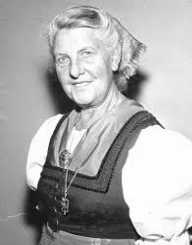 Maria Von Trapp was born on January 26, 1905, in Vienna in Austria in Hungary. She was born to Augusta and Karl Kutschera. She became an orphan by the age of ten having lost both her parents.

She attended the State Teachers College for Progressive Education, Vienna. In 1923, she graduated from the college at the age of eighteen. In 1924, she joined Nonnberg Abbey as a postulant. She had the intention of becoming a nun.

In 1926, as a teacher at the Abbey, Maria Von Trapp was asked to teach one of the children of the widower, Naval Commander Georg Von Trapp. In 1922, his wife died from scarlet fever. Maria taught one of his children and looked after the other seven.

The children were Agathe, Maria, Werner, Hedwig, Johanna, Martina, Rupert, and Franziska. Maria took good care of the children until George asked her to marry him. She was afraid after the proposal that she ran back to Nonnberg Abbey to seek advice from Mother Abbess.

Maria was told that God willed that he get married to Georg. She feared God, so she returned to Georg’s residence and accepted to marry him. In 1935, during the depression, the Maria Von Trapp family lost all their money to an Australian bank after Georg transferred all he had from a London bank. They faced financial difficulties. Thus they had to move to the upper floor of their house and rented the other floors.

Father Franz Wasner stayed with them during this period as their chaplain. The circumstances they went though propelled their singing career.

The family started singing, and they became famous and they started singing in concerts. They were later invited by Chancellor Kurt Schuschnigg to perform in Vienna after he heard them sing on the radio.

They performed at a festival later on, and this made them a popular touring act. In 1938, the experienced hard life under the Nazi regime after Austria was annexed by Germany. In 1938, the family moved to the United States.

With the use of the name ‘Trapp Family Choir,’ they performed in the United States and Canada. The family later changed their name to the ‘Trapp Family Singers’. They toured the world giving numerous concert performances. After the war, the family established the Trapp Family Australian Relief Fund. The fund distributed food and clothing to people who were suffering in Austria.

The family later became United States citizens apart from Georg. In 1947, Georg died of lung cancer in Vermont. In the 1950s, the family recorded a lot of their music that was popular all over the world. In 1957, the group disbanded, and everyone went their separate ways.

Maria Von Trapp and 3 of her children later became missionaries in Africa in Papua New Guinea. In 1965, she moved back to Vermont where she managed the Trapp Family Lodge.

Maria Von Trapp got married to Georg on November 26, 1927, and they had three children together, that is, Rosemarie, Eleonore, and Johannes. She died on March 28, 1987, of heart failure at the age of eighty-two. She was interred in the family cemetery at the Trap Family Lodge.