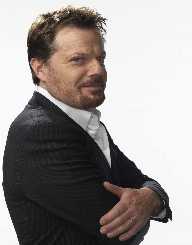 Eddie Izzard is an award-winning English stand-up comedian and actor known for his roles in films such as ‘The Riches,' ‘Shadow of the vampire,' and ‘Mystery Men.’ Notable, he is a voice actor in animations such ‘The LEGO Batman Movie’ and ‘The Chronicles of Narnia: Prince Caspian.’ Besides his television appearances, he has authored the book ‘Believe Me: A Memoir of Love, Death and Jazz Chickens’ released in 2017.Remarkably, he received several awards including a Primetime Emmy Award for his comedy special ‘Dress to Kill’ in 2000.

Eddie Izzard is a French Huguenot descent and the youngest son of English parents Dorothy Ella and Harold John Izzard, born on February 7, 1962. His mother Ella was a midwife and a nurse, while his father was an accountant for a British Petroleum in Aden.

After his birth, his parents moved from the Colony of Aden to Bangor, County Down until he reached the age of five. When Eddie Izzard was six years old, the family moved to Skeen, West Glamorgan. Izzard and his brother Mark built a model railway donated to Bexhill Museum. They created a model railway to keep them busy and not to preoccupy themselves with thoughts of their mother's illness. Unfortunately, at such a young age, his mother died after a struggle with Cancer.

Eddie Izzard started his acting career while he was an accountant student at the University of Sheffield. After leaving his degree course, he took his acts to the streets mostly in Covent Garden alongside a fellow student, Rob Ballard. Notably, he made his first stage performance in London on 1987 at the Comedy Store and started earning his recognition in the early 1980’s.
In 1994, Eddie Izzard made his performance as the lead in ‘The Cryptogram’ alongside Lindsay Duncan at the London’s Comedy Theatre. This performance resulted in another subsequent role in the Black comedy 900 Oneonta in 1995 where he performed as a character known as Christopher Marlowe Edward II.

In 1996, he appeared in ‘The Secret Agent’ film followed by a live comedy called ‘Cows’ produced by Sitcom’s Channel 4 in 1997. Three years later, in 1998, he made a brief appearance in ‘The American Film Institute’s Tribute to Monty Python’ alongside the Monty Python Team. During the same period, he also appeared on the BBC 1 episodes of ‘Have I Got News for You.’ In 1999, he played Lenny Bruce, a comedian in a play titled ‘Lenny.'

In 2001, Izzard acted the 1967 play ‘A Day in the Death of Joe Egg’ where he replaced Clive Owen at the Comedy Theatre. Later in 2003, Izzard and Victoria Hamilton repeated their roles in the Broadway show which was broadcasted by the Roundabout Theatre Company productions. This renewal received four Tony Awards nominations as the Best Revival of a Play, while Izzard and Hamilton earned their designation as the Best Leading Actor and Actress, and Laurence Boswell received a nomination for the Best Director.

Eddie Izzard appeared on BBC political debate in May 2005, during the ‘Question Time’ where he identified himself as a British-European culture. Notably, in 2009, Izzard made an appearance on a 1951 novel based, ‘The Day of the Triffids’ a BBC fiction miniseries. In 2010, Izzard played on David Mamet’s ‘Race’ where he replaced James Spader on Broadway.

Joyfully, he had the privilege of presenting medals to athletes during the 2012 Paralympic Games in London. Additionally, Izzard appeared in the 2013-2015 episodes of ‘Hannibal’ a psychological thriller and horror series which he played as Dr. Abel Gideon and also in the ShowTime series, ‘United States of Tara’ where he played Dr. Hatteras.

Mostly, Eddie Izzard made his comic performances in French but familiarised himself with other languages including German, Spanish, Arabic, and Russian which he also used during his stand-up shows in 2014. During the 2017 BBC Radio 4’s Book of the Week, Izzard had the privilege of reading extracts of his autography titled, ‘Believe Me.’ He also released his published book titled, ‘Believe Me: A Memoir of Love, Death and Jazz Chickens.’

In 1989, Eddie Izzard dated Sarah Townsend after he saw her at the Edinburgh Festival. Townsend is the director of Izzard’s documentary, ‘Believe The Eddie Izzard Story.’ Since then, Izzard keeps his extravagant lifestyle private as his companions do not want to be part of his comic contents. Interestingly, he is the associate director of Crystal Palace FC club since July 16, 2012.

He described himself as transgender or a male lesbian and started to talk freely about his transvestism during the 1992 Edinburgh Festival and identified himself as an atheist during his Stripped tour. Izzard considers himself as British-European an identity he campaigns for relating it to the Africa-American culture and a social-democrat who believes that Britain should elect their head of state democratically.

In 2008, Eddie Izzard made tours across Europe and produced a performance of ‘Stripped’ and donated the funds he collected to the housing services of New Orleans. On July 27, 2009, he ran across the United Kingdom to raise money to support sports relief which he received an award for the BBC Sports Personality of the year. Also, in March 2010, he took part in a Sports Relief Mile Event.

Moreover, the University of Anglia awarded Eddie Izzard with, an honorary Doctorate of Letters for being instrumental in promoting modern languages and his acceptance of other people’s cultures and lifestyles, in July 2003. The University Of Sheffield Faculty Of Arts awarded him with an honorary doctorate in Letters on July 2006, and on March 4, 2010, the University elected him as the Honorary President of the school’s Student’s Union.

During the British Television Channel 4 ‘100 Greatest series’ broadcasted on March 18, 2007, Izzard was ranked as number 3 out of the 100 high comedians of British. This ranking was followed by a rank five during the 2010 updated version. Izzard received his honorary doctorate from the University of Sunderland in 2012.

On February 20, 2013, Eddie Izzard received an award in Cultural Humanism from Humanist Community at Harvard University that is presented annually to Humanists, Atheists, and Agnostics. Triumphantly, he became the 2014 public language champion, an award issued at the annual Language festival known as ‘Guardian and British Academy 2014 Schools Language Awards by the readers of The Guardian. Izzard's website won a Webby Award and the Yahoo People’s Choice Award.