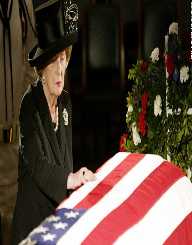 Christened Margaret Hilda Roberts at birth, and nicknamed the “Iron Lady”, decades later, Margaret Thatcher was one of the most remarkable 20th-century leaders. She was born in the month of October 1925, on the 13th day. She was the Prime Minister of Britain in the eleven years to 1990.

She was educated at the Grantham Girls' High School and her family was grocery store owners. Her father was also a politician who served as a member of the town council in Grantham in Lincolnshire, east of England.

Margaret Thatcher was a remarkable student and was tutored by Dorothy Hodgkin in Somerville College. Dorothy was a Nobel Prize winner in the sciences. As an oxford student, it was clear that she was not your everyday girl. She presided over the university’s Conservative Association. In 1947, she bagged a degree in the field of chemistry.

She worked in Colchester as chemist who was into research work. When she moved to Dartford, she also worked as a research chemist.


Entry To Politics And Early Acclaim

Her first bid for political office in the public sphere came after the first two years of graduation. Margaret sought to represent Dartford in parliament by running in the 1950 elections. Though she did not win, she continued to grow her profile with political speeches.

When Margaret put in another try in the year 1951, she again lost in her bid. She got into marriage life after two months and hooked up with Denis Thatcher.

By 1961, the Tories appointed her for a position in Pensions and National Insurance as an Undersecretary in parliament. She was in the shadow cabinet by the time the Labour Party controlled the U.K government.

By Edward Heath’s premiership in 1970, she got a role as Education secretary. Though she had a rocky first year in office, she endured till the Tories lost the 1974 elections. Margaret was to hug the limelight when her party voted her to lead the Conservatives in February 1975.

As a lady of steel character, her humble beginnings were not deterrence to the future she looked forward to. The stars were to smile on her by 1979 when the opposition party became divided and lost the elections.

Her appointment brought in a wave of economic reforms which she targeted at reversing the run of national decline. She was astute and made bold of radical initiatives to steer the ship of state to calm water. This was not without challenge but she was undaunted and used to riding against the tide of populism.

Margaret had the record as the only Prime Minister to govern Britain in the 20th century with three terms in the kitty. She had a run of two decades of leadership which was inevitably etched in the annals of English political attainments.

Her notable points include the transformation of the Conservative Party into the vanguard of national leadership. Margaret was keen to move her country into the mainstream of market economics with little attachment to social welfare,

Her direction in office was what led to the growth of Thatcherism which forgedahead on less of subsidies and more of free market evolution. She tweaked money in circulation alongside taxation and fiscal policies to tame inflation. These were the heights of monetarism.

She was also noted to have taken time to study Law, away from the tough life of politics from 1951 to the year 1954.

Margaret rode on the waves of populism when she led her country to war and victory over the Argentines. The strip of Islands called Falklands was the basis of the war and Britain’s victory was well received by the populace.

The successful turn of events with the Falklands War became the basis of the dominance of the Tories in the 1982 general elections. This term of office was the third for Thatcher and she maximized it by breaking up state-owned monopolies. The oil, airports, steel, and telephone sectors were all affected by the sweep of denationalization.

She became the Amazon for less of trade unionism, market-driven competition, privatization, and self-reliance. This was what Thatcherism was all about.

The miners’ strike of 1984 was a defining moment as she got them back to work after closing uneconomic pits. The workers gave up their allowances and yet returned to work.

She was not a fan of the EU federalism which was just budding at this point in history. Her drive for economic reliance for her nation was remarkable.

Margaret Thatcher had a tough reputation. And she endured the toils of office by not sleeping for more than four hours each night. For been a stickler for tough decisions, she was nicknamed the ‘Iron Lady”.

The world took note of her strides in office and by 2012; a movie was made about her life and times. The film was tagged “The Iron Lady”.

Margaret was married to Denis for 51 years and they had Carol and Mark, who were twins.