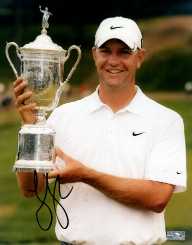 American golf professional Lucas Glover was born on the 12 November 1979 in Greenville, South Carolina. He was born to Ron Musselman, a major-league baseball and Hersey Hendley. Dick Hendley, the former professional football player, was his grandfather. After his parents divorced, Musselman lost custody of his son. Hendley married Jim Glover, and her son took his stepfather’s name.

At the high school, Lucas Glover was a Rolex High Junior All-American three times. He also won the South Carolina State High School golf championship as a freshman and as a sophomore. During his high school years, he was All-State for four years in a row. He won the South Carolina Amateur tournament three times (1998, 1999 and 2000). And in 2001, he won the Sunnehanna Amateur.

As an amateur Lucas Glover participated in the Palmer Cup in 2000 and 2001, when the team won both times. As a professional, he was in the team which won the Presidents Cup in 2007 and 2009.