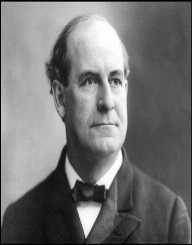 William Jennings Bryan was born on March 19, 1960, in Salem, Illinois, USA. His parents were Mary Jennings and Silas Bryan. His siblings were Charles Bryan and Mary (Bryan) Allen.

For much of his youth, William Jennings Bryan was homeschooled. It wasn’t until 1874 that he attended a “real” school called the Whipple Academy. He attended this school until his high school graduation.

After joining the Bar, William J. Bryan practiced in his law career in Illinois, before moving to Nebraska in 1887. Soon after, he slowed on his law career to focus on his political career.

William J. Bryan began his political career in 1890 when he was elected to be a member of the United State’s House of Representatives. He had run as a Democrat (he would stay in this political party for the rest of his career).

William J. Bryan made his first run for the presidency in 1896. One of the things that helped Bryan to stand out was that, at the time, he was the youngest man to run for president. However, this didn’t help him stand out enough to win the election. McKinley would go on to win this election.

In the late 1890’s, one of the thing that Bryan was known for best was for his anti-imperialism stance. He was against the emerging colonial nature of the United States. William J. Bryan was especially impressed with the country annexing the Philippines. He did not want the US to make the Philippines a colony, or to obtain colonies anywhere else. He would later use this stance when he ran for president for a second time, in 1900. However, he also lost this election, again to McKinley.

William J. Bryan ran for the US presidency for a third and final time in 1908, losing again, this time to Taft. After this loss, he changed his focus to becoming more involved with the public education system in the country. He wanted schools to be more religious (Christian) in nature.

In 1912, Woodrow Wilson was elected as the new president of the US, and he soon appointed Bryan as the new Secretary of State. He held this position until 1915.

In the 1920’s, Bryan returned his focus to that of the US public education system. One of his main concerns was that of Darwin’s then-new theory of human evolution (which stated that humans evolved from primates). He thought this went against Christianity and the teaching of the Bible. He soon launched his own anti-evolution campaign in 1921 to ban the teaching of evolution in public schools. Eventually, it became illegal in some states.

In 1925, he was involved in a trial against the teacher John Scopes, who was caught teaching evolution. Eventually, Scopes was found guilty. It wasn’t until some time later that the Supreme Court reversed the initial court ruling and acquitted Scopes.