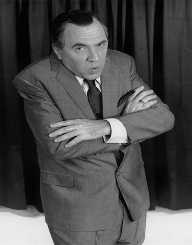 Ed Sullivan was an American TV personality and host who is best known as the host of The Ed Sullivan Show.

Sullivan was born on 28 September 1901 in Harlem, New York. His family were of Irish descent; his parents were Elizabeth née Smith and Arthur Sullivan. Sullivan had a great love of music and sports as a youth. He would play all genres of music on the family phonograph. He excelled at sport at school, he ran track, played on the basketball and football teams and captained the school baseball team. Sullivan began working as a journalist for the local newspaper. He joined The New York Evening Mail in 1919 as a sports reporter. The paper folded in 1923 and Sullivan took some different postings for various publications.

In 1927, Sullivan became a reporter and later the sports editor of The Evening Graphic. In 1929, he began writing about the shows on Broadway and his column would also appear in The New York Daily News. In 1933, wrote and starred in the film Mr. Broadway. The release of the film and his column, Little Old New York, made Sullivan a well-known name in show business. Sullivan would also produce some acts during the 1930s, in particular, vaudeville acts.

Ed Sullivan began hosting the variety show, Summer Silver Theater, in 1941. Sullivan would be joined by a guest each week who would perform on the show along with the resident band. He was then hired by CBS in 1948 to host a televised weekly variety show called, Toast of the Town. The show was popularly known as the Ed Sullivan show and was renamed The Ed Sullivan Show in 1955. The debut of the show featured Dean Martin, Jerry Lewis, Rodgers and Hammerstein and Monica Lewis. Sullivan was continuously criticised for his stilted and wooden appearance on the show, and his lack of any discernible talent was frequently brought up. However, the show became a popular fixture of Sunday night entertainment, and the average American household liked Sullivan.

Sullivan was also key in planning the line-up for the show he would use his experience from reporting on Broadway to help the show. The show would feature musical, vaudeville and comedic acts. It would also have guests from the worlds of sport and theatre. Sullivan was also often joined by a small Italian mouse puppet named, TopoGigio. Sullivan’s fame was only added to by the long list of comedians who did impressions of him, notably Johnny Carson, Rich Little and Joan Rivers. Sullivan was an American cultural icon and has been a character in some films based on acts who have appeared on his show.

In 1963 Ed Sullivan appeared as himself in the film, Bye Bye Birdie. A famous episode of The Ed Sullivan Show aired in 1958 and dealt with mental illness. Sullivan interviewed director Joshua Logan about his time in a mental institution. The episode is attributed to deeply broadening the popular consensus on mental illness in America. The show is famed for launching some acts into the American mainstream. The Ed Sullivan Show was often the first national TV show that acts would appear on. Most famously the show is attributed to launching The Beatles to superstardom in America. The band appeared three times on the show in 1964 and received top billing each time despite not being well known at the time. Their first appearance was the most watched hour of television history at the time. Sullivan was also a great fan of the group The Supremes; they would appear on the show fourteen times.

Sullivan was one of a small number of hosts that openly welcomed black artists on his show. Sullivan faced huge criticism for shaking Nat King Cole’s hand live on air. There were also some famously controversial performances on the show. Sullivan had a falling out with Buddy Holly over his choice of songs. The Doors were banned from the show following their reneging on an agreement to change their lyrics on a live performance. Sullivan was also critical of Elvis Pressley and was adamant he would not appear on the show. This changed when Pressley exploded to fame and would appear three times on the show. The show eventually went into decline in the late 1960s and was canceled in 1971; it had run for twenty-four seasons and one thousand and sixty-eight episodes.

Ed Sullivan was engaged to Sybil Bauer, but she died of cancer in 1927 before they could marry. In 1930, he married Sylvia Weinstein; both families were critical of the mixed religion nature of the marriage, Sullivan being Catholic and Weinstein being Jewish. They had a daughter, Elizabeth, together. Elizabeth would marry the producer of The Ed Sullivan Show, Bob Precht. In 1974, Sullivan was diagnosed with oesophageal cancer. He would succumb to the disease on 13 October 1974. The Ed Sullivan Theatre in New York is named in his honor, it today acts as the set for The Late Show with Stephen Colbert.