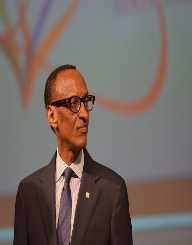 Born on October 23, 1957, Paul Kagame is the President of Rwanda. Paul Kagame assumed power as the sixth president in 2000, when the then President, Pasteur Bizimungu resigned. Before taking office, Paul Kagame had served as the Minister of Defense and later as the Vice President. Before coming into active politics in Rwanda, Paul Kagame was once a rebel in Uganda and later became a senior commander in the Uganda army during President Yoweri Museveni’s reign.

Paul Kagame later joined the rebel group Rwanda Patriotic Front (RPF) which invaded Rwanda in 1990 and ousted the then leader Fred Rwigyema who died in the war. As president, Paul Kagame has made giant strides post the tribal war between the Hutus and the Tutsis in that country. Paul Kagame has also helped build a good international relationship and image.

Paul Kagame was born on October 23, 1957, in Tambwe, Ruanda-Urundi to Deogratias and Asteria Rutaganbwa. Paul Kagame was the youngest of six children. His family was from the Tutsi ethnic group of Rwanda. Kagame’s family was part of the people who left Rwanda to neighboring countries during the Rwandan Revolution in 1959. About 100,000 Tutsi’ turned into refugees during this time. The family found their way to Uganda after about two years of living in the north-west of Rwanda. In Uganda, they settled in the Nshungerezi refugee camp in 1962. During this time, Paul Kagame started his primary education at the camp learning English.

Paul Kagame later went to the Rwengoro Primary School and continued the Ntare School. Paul Kagame father died, and mother also got missing, leaving the young man in disarray. Paul Kagame dropped in educational performance and got suspended from the Ntare School. He enrolled at the Old Kampala Secondary School afterward, where he graduated. After graduation, Paul Kagame paid two visits to his homeland, Rwanda on different missions. But the latter was one which got him connected and subsequently strikes on the Rwandan government.

Whiles in Uganda as a political refugee, Paul Kagame served as a rebel under Yoweri Museveni in the Ugandan Bush War and later joined the army when Museveni overthrew the government of Idi Amin in 1978. His friend Fred Rwigyema also fought in the war and re-established contact with Paul Kagame and both with other Rwandan refugees pledged to be committed to Museveni. Paul Kagame later moved to Uganda where he was trained as a spy. In 1980 after the Ugandan election, Museveni lost to Milton Obote which he protested. After an unsuccessful protest, he again formed a rebel group, National Resistance Army which included Paul Kagame and Rwigyema in 1981. Paul Kagame main objective for joining the rebel was to train himself in a military way to later rise against the Hutu-dominated army in Rwanda and liberate the Tutsi’. Though Obote was overthrown in a military coup d’etat in 1985, Museveni and his rebels continued to fight till they captured power in 1986.

Paul Kagame and Rwigyema then became senior army officers with Kagame acting as head of military intelligence. However, in 1989,  the President of Rwanda, HabyarimanacriticisedMusevenifor giving such a top position to Rwandan refugees which caused their demotion. The upset caused and their already intended plans made Kagame and Rwigyema join the Rwanda Patriotic Front (RPF) which has been in existence since 1979 and aimed to overthrow the Rwandan government. Rwigyema became the leader of the group and planned for the invasion.

The first attack of the RPF was in October 1990 when Rwigyema led about 4000 rebels into Rwanda. However, it was unsuccessful, and Rwigyema died in that attack, the RPF was also pushed back to the northeast corner of the country. Paul Kagame was not part of that invasion because Paul Kagame was then pursuing a course at the Command and General Staff College at Fort Leavenworth, United States. Paul Kagame after his course came back to lead the RFP which might have been reduced to just about 2,000 troops.

Paul Kagame reorganized the army for combat with support from Tutsi diaspora. Paul Kagame led the army for its first combat in 1991 with an attack on the northern town of Ruhengeri. The rebel army continued their advance till 1992 when a cease-fire was announced for a formation of a multi-party coalition government in the country. The peace talk was held in Arusha, Tanzania. Just a year into the peace talks, some Hutu extremist formed a group and melted violence on Tutsi’ which caused the suspension of the talks and the rebels resumed their assaults. They made several advances, gaining lands in towns in the north. An Arusha Accord was later reached from the peace talks and was signed in 1993. The RFP was given a position in the Rwandan army and the broad-based transitional government (BBTG).

The peace talks had brought peace into Rwanda until 1994 when the plane carrying President Habyarimana's, and the President of Burundi, Cyprien Ntaryamira, and other crew members was shot down killing all. This angered the Hutus who claimed the Tutsis were involved in that act. Though later investigations proved otherwise and apportioned the blame on Hutu extremists, who were against President Habyarimana's and had already planned to attack the Tutsis but wanted an excuse. Colonel Theoneste Bagosora who was the leader of a military committee took over the country after the incidence. Paul Kagame, therefore, launched an attack on Tutsis and opposition Hutus through the Hutu militia Interahamwe and the Presidential Guard.

They kill the Prime Minister Agathe Uwilingiyimana and other Tutsi which began the Rwanda Genocide, which killed between 500,000 and 100,000 Tutsi and moderate Hutus in a space of 100 days. This act by the government forces charged Paul Kagame and the RPF to fight back. Though an interim government was initiated, Kagame refused to join, and the RPF advanced in their assault and took control over strategic points in the country all this while they were protecting the Tutsis and moderate Hutus. In July 1994, the RPF was able to defeat the Rwandan government forces in Kigali, Gisenyi and other strategic towns which forced the government forces to Zaire and the genocide was ended.

Paul Kagame assumed the role of Vice President and Minister for Defense in the post-genocide Rwandan government and the RPF later Rwandan Patriotic Army was infused into the national army. During this time he was able to bring stability and maintained peace and order. Paul Kagame was able to bring all ethnic groups together and expunged ethnicity from the national identity card. In 1996, Hutus especially ex-officials who sought refuge in Zaire gathered and determined to capture power which Paul Kagame counteracted defeated them. Kagame also had hands in the Congo war which ousted the longtime dictator Mobutu Sese Seko as the minister of defense.

Paul Kagame assumed the presidency when President Bizimungu resigned from office. Paul Kagame was later sworn in as substantive president when he was elected by the government ministers. As president, Paul Kagame initiated for a new constitution for the country and therefore set up Constitutional Commission. A draft was presented in 2003, and a referendum which was overwhelming accepted by 93%of the voting population. An election was later held on August 25, 2003, with three candidates Kagame, Twagiramungu, and Nayinzira.

Paul Kagame won that election with 95.1 % of total votes. In 2010Paul Kagame contested again after his first term had expired and once again won with 93.08% in an election held on August 11, 2010. After a second successive term and was not eligible to contest again, a constitutional referendum was held in 2015 making him eligible to contest for the third time. Paul Kagame has contributed immensely to the development of Rwanda in terms of economy, health, and education and has enhanced the foreign policy of the country. Today, Rwanda is one of the neatest countries in the world and positioning itself as an economic hub in Africa.

Paul Kagame married Jeannette Nyiramongi on June 10, 1989, in Uganda. Jeannette was a Tutsi who was in exile in Nairobi, Kenya. They have since had four children, three boys, and a girl.