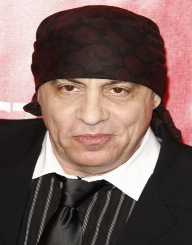 Steven Van Zandt was born on November 22nd, in 1950. He is famous for being an American musician. He rose to the limelight after being a member of the E Street Band headed by Bruce Springsteen. As an actor, he earned immense recognition after featuring in The Sopranos from 1999-2007. He played the recurring role of Silvio Dante in the TV drama.

Steven Van Zandt was born on November 22nd, in 1950. His birthplace was in Boston, Massachusetts. At the time of his birth, he was given the name Steven Lento. Van Zandt’s mother’s name was Mary Lento. However, in 1957, she got married to another man. Consequently, Van Zandt was given the last name of his stepfather named William Brewster Van Zandt. When he clocked seven, his family moved and went to reside in New Jersey.

Growing up, Van Zandt was greatly influenced by performances from The Beatles. Also, he developed a particular interest in learning to play the guitar when he was still young.

For his high school education, Steven Van Zandt enrolled with Middletown High School. Here, he was expelled from school due to his long hair. Nevertheless, he managed to complete high school in 1968 with the help of motivation from his mother.

Growing up in a musical scene environment on the Jersey Shore, Steven Van Zandt was greatly influenced to try his luck in the music industry. While living around this area, he also became friends with Bruce Springsteen. At first, the two crossed paths around 1967. They later went ahead and performed together in a number of bands such as the Steel Mill. After that, they worked together in Bruce Springsteen’s Band.

At some point, Van Zandt drifted from the show business and worked in road construction. He spent two years here before finally getting back to the music industry. In 1973, Van Zandt worked with the music group called The Dovells.

Aside from the fact that he played in different bands, Van Zandt also wrote songs and produced them during the mid-1970s. He helped produce Hearts of Stone record hit for the Southside Johnny and the Asbury Jukes. Also, he helped Gary U.S. Bonds in producing two of his albums.

Up to 1999, Steven Van Zandt had concentrated his efforts in the music scene, and therefore he had no prior experience in the film industry. During this year, he opted to participate in the auditions for The Sopranos. After landing on a leading role of Silvio Dante, acting became an essential part of his career.

With time, his role in the TV show continued to bear a considerable significance both to the show and to his career. Due to his remarkable performance in the show, he garnered immense recognition. Later, in 2012, he featured in the Norwegian-American TV series called Lilyhammer.

Steven Van Zandt wife is called Maureen Van Zandt. The two exchanged vows in late 1982. His longtime friend and band partner, Bruce Springsteen was his best man at his wedding.