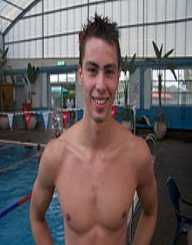 Shahar Tzuberi has loved athletics ever since he was a child. In fact, he first began wind surfing when he was only seven years old. His father enjoyed the sport and taught his son as early as he could. The Tzuberi’s hometown is near the Red Sea, which gave Shahar Tzuberi many opportunities to practice and master wind surfing. Even as a child, Tzuberi had already begun taking professional lessons in the sport.

Throughout Tzuberi’s childhood and teen years, he competed in many wind surfing competitions, winning a fair number of the competitions he entered. In 2000, when he was only 14 years old, he entered one of his biggest competitions up until that date-- the Wind Surfing Championship for Boys. He did not win the competition but did earn a silver medal for his efforts. It was around this time that Shahar Tzuberi became determined to continue his training to one day compete in the Olympic Games.

In 2005, Shahar Tzuberi joined the Israel Defense Forces (IDF). The IDF is Israel’s form of military. While Tzuberi did not have military ambitions, it is required by law for Israeli citizens (both men and women) to serve time in the IDF. Tzuberi served his time in the IDF Navy as a quartermaster. He stayed in the IDF until his required term was up.

In 2006, Shahar Tzuberi got back to training. By this time, the official wind surf board had changed to the Neil Pryse RS:X. Since he was so young, he easily adapted to this new board, but older members of the wind surfing community could not adapt as well. In the same year, he won a competition using this board.

From 2009 to 2010, he competed in the European Championships, which he did fairly well in. In 2011, he mostly trained, as he was preparing for the 2012 Olympic Games. After the games, in 2013, he entered the ISAF Sailing World Cup. He won first place in this competition.

Shahar Tzuberi continues to compete and train to this day.

In 2008, after years of training, Shahar Tzuberi joined the 2008 Olympic Games, which were being held in Beijing, China, that year. He was on Israel’s team, as that is his home country. He went on to win the bronze medal in this year.

For the next couple of years after the 2008 games, he continued to enter in other competitions, as well as continuing his training. In 2012, he entered in the Olympic Games again. He was still on the Israeli team, but this time the Olympic Games were taking place in London, England. He carried the Israeli flag in this year as well. Sadly, he did not earn a medal in this year as he came in twentieth place.

Shahar Tzuberi competed again in the 2016 Olympic Games, which were taking place in Rio de Janeiro, Brazil, in this year. He did not place in this year, as he did not even qualify to be in the finals.