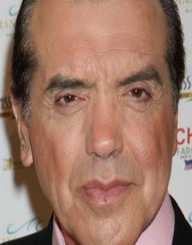 American actor Chazz Palminteri was born Calogero Lorenzo Palminteri on the 15 May 1952 in the Bronx, New York to Rose and Lorenzo Palminteri. His family originated in Agrigento, Sicily, Italy with his grandparents immigrating to the United States. He was brought up in the Belmont area of the Bronx.

Chazz Palminteri was a pupil the Theodore Roosevelt High School, a large public school in the Bronx. He also studied at Lee Strasberg's School of Acting in New York City.

In the early 1980s, Chazz Palminteri appeared in off-Broadway productions and also performed as a singer in a band he had founded. At times, he worked as a bouncer. He found success with his one-person show, A Bronx Tale. The show played to sold-out audiences for four months in New York City, and the New York Critics Circle awarded Palminteri for his acting and writing. Robert De Niro chose A Bronx Tale (1993) for his directorial debut while Palminteri wrote the screenplay and starred as Sonny.

He voice acted in as Smokey in Stuart Little (1999) and as Buster in Lady, the Tramp II: Scamp’s Adventure (2001) and Woolworth in Hoodwinked! (2004). In 2005, he appeared as himself in the Encore documentary, Bullets Over Hollywood.

Chazz Palminteri was presented with a Special Achievement Award for the Performing Arts from the National Italian American Foundation and has also received a Leadership in Entertainment Award from the Coalition of Italo-American Association. He is a member of the Actors Studio in New York City. He won the Method Fest Independent Film Festival’s Indie Hero Award in 2004.

In 1995 Palminteri won the Film Independent Spirits Best Supporting Male award for his role in Bullets Over Broadway (1994). At the Hollywood International Pictures Film Festival (2018), Unorganized Crime (2018) received an award for the Best Short Drama - a distinction shared with Kenny D’Aquila. They also won the 2018  Independent Shorts Awards Gold Award for Unorganized Crime (2018).

Chazz Palminteri is married to Gianna Ranaudo, and they have two children. His Italian restaurant, in partnership with the Empire Steakhouse chain, is located on 30 West 64th Street, New York.