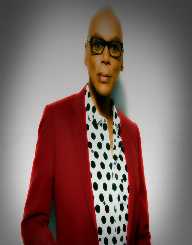 RuPaul is a prominent and award-winning American drag queen regarded as the as the most commercially successful drag queen in the United States. Born on November 17, 1960, he is also a singer, songwriter, actor, television personality, model, and an author.RuPaul came to fame with the release of the debut single Supermodel (You Better Work) from his debut studio album Supermodel of the World in 1993. In 1994, he started and hosted his own talk show, The RuPaul Show on VH1, which run for more than 100 episodes. He was at the same time co-hostingWKTU’s morning show alongside Michelle Visage.

RuPaul is the producer and host of the award-winning reality competition series RuPaul’s Drag Race since 2009. In 2016 and 2017, he won the Primetime Emmy Awards for the show. As a singer and songwriter, RuPaul has 14 albums to his credit in including Foxy Lady, 1996, Champion, 2009, Born Naked, 2014 and most recently American in 2017.

RuPaul was born on November 17, 1960, in San Diego, California. His mother Ernestina"Toni" Charles gave him his name with the “Ru” coming from the roux. After the divorce of his parents in 1967, he along with three sisters lived with their mother. Growing up, he started wearing the clothes of his sisters. With his interest in acting, RuPaul moved to Atlanta, Georgia at age 15 along with his sister Renetteto study performing arts but did not graduate.

Although RuPaul has been very successful in his career, the beginning was very though. In the 1980s he hassled his way through as a filmmaker and musician. While in Atlanta, he performed as a dancer with his Wee Wee Pole band at the Celebrity Club.

He also worked in the undergrounds cinema helping in the release of the low budget film Star Booty. He performed as a backup singer to Glen Meadmore and the drag queen Vaginal Davis. RuPaul also performed in nightclubs in New York City annually participated in the Wigstock drag festival.

Supermodel Of The World And Other Albums

Under the rap label Tommy Boy, RuPaul released his debut album Supermodel of the World in 1993. A single on the album “Supermodel (You Better Work)” became an instant hit with its video also climbing to success on MTV channels. Supermodel (You Better Work) also charted, peaking at No. 45 on the Billboard Hot 100 and on the top 40 UK Singles Chart at No. 39. It also peaked at No. 2 on the Hot Dance Music/Club Play chart. Other singles like Back to my Roots and A Shade Shady (Now Prance) also become popular and sold out his personality.

In 1996, VH1 offered him the opportunity to host his own talk show, The RuPaul Show with co-host Michelle Visage. The concept of the show was interviewing celebrities and musical acts. He hosted big names in the industry including Diana Ross, Mary J. Blige, Dionne Warwick, Pat Benatar, Back Street Boys, and Olivia Newton-John among others. The popularity of the show propelled him on his return to WKTU radio in New York City to host the morning show with co-host Michelle Visage until 1998.

RuPaul came up with the reality television game show, RuPaul’s Drag Race that first aired on Logo TV in 2012. On the show, drag queens compete among themselves to be judged by RuPaul and another panel of judges. The winner is adjudged as America’s next drag superstar. BeBe Zahara Benet was the winner of the first season of the show. He won the Primetime Emmy Award for Outstanding Host for a Reality or Reality-Competition Program in 2016.

Acting Career And others

The versatile RuPaul started acting in the 1980s playing minor roles in several films and television productions. He played the role of a female counselor when he guest starred in Brady Bunch movies. In 1995, he published the autobiography, Lettin; It All Hang Out. His films include A Mother’s Prayer, Fled, A Very Brady Sequel, But I’m a Cheerleader, The Truth About Jane and Who is Cletis Tout? Others include Dangerous Liaisons, Another Gay Sequel: Gays Gone Wild and Hurricane Bianca.

In 2017, RuPaul married his long-term Australian partner Georges LeBar. The couple had been dating since 1994 after meeting at the Limelight nightclub in New York. LeBar runs a ranch in Wyoming and is a painting enthusiast.

He has a star on the Hollywood Walk of Fame for his contribution to the television industry. He has won two GLAAD Media Awards, NewNowNext Awards for Best New Indulgence, 2010, and TV.com’sBest of 2012 Awards for Best Reality Show Judge/Host for RuPaul's Drag Race.