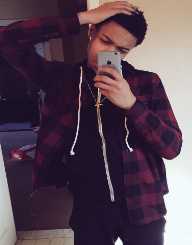 Nic Wallace was born on August 7, 2000, in Boston, Massachusetts, USA. His family later moved to Illinois, so that is where he has most of his memories from. His mother’s name is Meghan Wallace. He has two siblings, Lily and Wes.

Before Nic Wallace was a social media sensation, he didn’t use the computer as often as he does now. He used to be more interested in sports, but he still plays them sometimes. Some of his favorite sports to play now and then are football and baseball.

Nic Wallace posted his first picture on Instagram, a video, and picture sharing website, in 2014. His Instagram name is thenicwallace. Unlike other social media sensations, he didn’t get famous on the site right away, which is likely because he didn’t use the site often at first. It wasn’t until 2015 that he started to use the site more often, and it was also in this year that his social media fame began. It was anything but a coincidence. He currently has almost 200,000, which is a crazy amount even for an Instagram sensation, especially when considering that he has less than 300 posts on his page. His fans care about quality over quantity when it comes to his pictures.

Nic Wallace has also appeared in some of his friend’s YouTube videos, which has added to his social media fame. He was in a famous YouTuber’s (Johnny Orlando) video called the Rainbow Milk Challenge. This video got a lot of attention because of Orlando’s fame and because there were two other YouTube stars in the video: Dylan and Hayden Summerall.

Nic Wallace became even more popular on YouTube when he began dating the young dance sensation, Jordyn Wallace. Both Nic and Jordyn’s fans came together to watch their videos. Both people’s fame grew while in the relationship. They appeared in many videos together while they were dating.

Nic Wallace also has his own YouTube channel that he started in 2013. However, he does not have any videos on this channel. That doesn't stop fans from commenting on his page, waiting to get a message back from him. However, it seems as though he has not used his personal channel since about 2016. Maybe he will make a return to the site. Fans will just have to wait to see.

Nic Wallace is not only famous on YouTube and Instagram, but he also has a popular Twitter account that has over 6,000 followers. He joined this site in 2014 and had been using it ever since. This is much less than his other social media accounts, but it still adds to his social media. His name on this site is @Nicwithac12. On the site, he posts mostly updates on his life in text form, which is different from what he does on his other sites. He has also posted some pictures and videos on the site as well.

In 2015, Nic Wallace began dating the dancer Jordyn Jones, who was on a dance reality show. Because he was dating her, he gained even more popularity. When dating her, his Instagram page got a boost in fans. However, Nic Wallace broke up with Jordyn in early 2016, claiming that she was too obsessive. The ex-couple are not friends anymore. It is unknown whether or not he currently has a girlfriend.