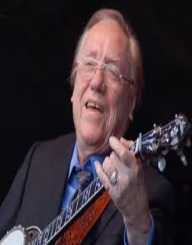 Earl Scruggs was an American bluegrass musician known for creating the Scruggs Style for playing the banjo.

Earl Eugene Scruggs was born on January 6, 1924, in a small community in North Carolina. He was the youngest of the five children of Lula Scruggs and George Scruggs, a bookkeeper and farmer.

His father passed away when he was four years old. Earl Scruggs graduated from the Boling Springs High School. While studying, he also worked at the local textile mill.

All of Scruggs’ family members were involved with music. His father played fiddle and banjo. His mother played the organ. All four of his siblings played the banjo, guitar, or both. Following his father’s death, he decided to start playing the banjo to cherish his legacy. He spent the following years of his childhood dedicated to perfecting the instrument.

When he was only ten years old, Earl Scruggs managed to master playing the banjo with three fingers. Before that, it was normal to play a five-string banjo with only two fingers.

Other musicians had tried to use three fingers instead, but Earl Scruggs was the first one that managed to master that style truly. This technique is now called “Scruggs Style,” and it is one of the defining characteristics of bluegrass music.

After high school, Scruggs decided to become a professional musician. He spent a while performing on local radio stations with smaller bands. His first bigger success arrived in 1945.

Earl Scruggs joined Blue Grass Boys, the band of prominent musician Bill Monroe. The band was the leading representative of the bluegrass genre. They often played on the famous Grand Ole Opry country music show in Nashville. They also went on a few national tours.

In 1948, Earl Scruggs left Blue Grass Boys with the guitarist Lester Flatt. Together they formed their band, Flatt and Scruggs and the Foggy Mountain Boys. They became very popular. They managed to release dozens of records. Some of their most famous hits were “Foggy Mountain Breakdown” and “Earl’s Breakdown.”

Earl Scruggs left the band in 1969. He decided to join his sons Gary, Randy, and Steve in a new ensemble called the Earl Scruggs Revue. He was tired of the repetitive classic bluegrass sound.

He wanted to try something new and experiment with different genres. The tracks his new band started creating contained elements of rock and country music. They quickly gained fans and began appearing on festivals and television live shows.

Due to health reasons, Earl Scruggs had to leave full-time performing in 1980. He continued to record and publish music in the following years. In 1983, he released the compilation album Top of the World. In 2001, he released the album Earl Scruggs and Friends featuring performances from famous musicians like Elton John, Sting, and several others.

Earl Scruggs received numerous awards throughout his long musical career. He was inducted into the Country Music, Bluegrass Music, and North Carolina Halls of Fame. In 1992, he was awarded a National Medal of Arts.

In 2003, he received a star on the Hollywood Walk of Fame. Numerous musicians stated their praise for him on different occasions. His most significant musical accomplishments were his four Grammy awards, including the Lifetime Achievement Award he got in 2008.

Earl Scruggs passed away from natural causes on March 28, 2012, at the age of 88. His funeral was held in Nashville, and it was open to the public.