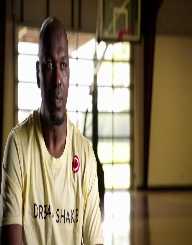 Hakeem Olajuwon grew up in Nigeria. He moved to the United States when he was about to start college. He didn’t play basketball until he was 15 years old, but his talent for the game was obvious from the beginning. It took no time at all for him to master the sport.

In 1984, Hakeem Olajuwon was drafted by the University of Houston. His height (7’) gave him an advantage in the game, as did his skill in other games, like soccer. Some may have doubted him at first, but he quickly proved to have what it takes to stay in the game. He was later nicknamed “The Dream” for his dream-like skills on the court. At the end of his first season, he was the number one pick in the NBA draft for his team.

In the early 1990’s, Hakeem Olajuwon earned his American citizenship. Because of this, he could now enter the Olympics under the American team. He joined the Olympic basketball team in 1996. He helped the team to achieve victory, earning the US a gold medal.

After the Olympics, Hakeem Olajuwon returned to the Houston team. It was like he never left, and he continued to shatter expectations from everyone who watched him play. He continued to play for Houston until the end of the 2000-20001 season. He was then traded to the Toronto team. He only played with this team for the 2001-2002 season before retiring from basketball.

Even though Hakeem Olajuwon retired from basketball, he didn’t retire from working completely, and he didn’t give up on the sport. He went on to instruct other basketball players, teaching them all of the tricks and tips that he could. He also works as a real-estate dealer in Texas.

Throughout his career in professional basketball, Hakeem Olajuwon racked up more than his fair share of sports-related awards. Some of his most prestigious awards are listed below.

Hakeem Olajuwon was named an All-Star 12 times during his career. He was named one of the 50 Greatest Players in NBA History (1996) In 2008; he was inducted into the Naismith Memorial Basketball Hall of Fame.

Hakeem Olajuwon had an arranged married to Dalia Asafi in 1996. Together, the couple had three daughters Abu, Aisha, and Rahmah. Like her father, Abi also went on to play basketball.