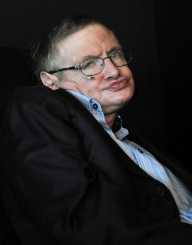 Stephen Hawking was born on January 8, 1942, in Oxford, Oxfordshire, England, in the midst of World War II, to parents Frank and Isobel Hawking. Frank was a medical researcher, who studied at Oxford in his youth and specialized in Tropical diseases, and Isobel was a bright young woman who earned a degree at Oxford University, at a time when many women could not go to college.

He is the eldest of four siblings, which include Edward, Philippa, and Mary. All in all, Stephen Hawking came from an intelligent family, so it was no surprise that he turned out to be a celebrated wise man himself.

Stephen Hawking was born in a tumultuous time in history, during the midst of World War II. The family struggled during the wartime, as did most other families during that time. When the war was over, life returned to normal, but friends and neighbors thought the Hawking family was anything but ordinary. They were quiet people who loved reading more than talking to each other.

Many aspects of their life hinged on the eccentric, but the family was anything but dim. The intelligent parents of the Hawking family encouraged their children to read and learn as much as possible. Apparently, Stephen took that to heart.

From a young age, Stephen Hawking showed an interest in science. His parents hoped he might grow up to be a doctor, but his interests soared far beyond the anatomy of humans and into the sky with the stars above. He was always looking up into space, and this encouraged a lifelong interest and curiosity in an area for him.

Stephen Hawking first attended St Albans School in his youth. Although it doesn’t seem to fit his personality, he was not always a star student. His grades were average at best, but he often spent his time working on scientific pursuits: building machines with his friends, making up games, and exploring the outdoors with his family were some of his favorite hobbies.

When he was only 17 years old, Stephen Hawking was accepted into Oxford University. While there, he studied physics and cosmology. Outside of academics, he joined the university’s rowing team, which he was quite good at. He graduated from the school in 1962 with honors in natural science.

After graduation from Oxford, he attended Trinity Hall at Cambridge University to continue his studies. There, he earned a Ph.D. in cosmology.

Stephen Hawking has a fantastic job that has started in the late 1960s and continued to this day. Some of this career highlights are listed below.

Throughout his prolific career, Stephen Hawking has earned over ten honors for his scientific awards for his achievements. Some of his most impressive awards are listed below.

While in college, Stephen Hawking noticed that he was beginning to have health problems. He often felt clumsy, or his speech would slur. He finally went to a doctor for his symptoms in 1963. He had to be tested for weeks before he knew what was wrong. He was diagnosed with ALS (amyotrophic lateral sclerosis), which is more commonly known as Lou Gehrig's disease. This disease made him almost completely paralyzed.

Doctors predicted that he would only live for a couple of years after the diagnosis, but he lived for decades longer, and he is still doing well. Hawking notes in interviews that being diagnosed with ALS gave him a new outlook on like. He could die any day, so he knew he had to make every moment count. From that point on, he threw his heart and mind into his studies.

However, in 1985, Stephen Hawking was further hurt by a medical procedure. Tracheotomy left him without a voice. For some time, he had to be under the care of a 24-hour nurse. Luckily, a computer scientist invented the machine that would help Hawking to speak through a computer.

Since it’s invention, the machine has gone through several changes to adapt to Hawking’s disability. It has given back his speech, in a way, and helped him to continue to write about his research.

Stephen Hawking has inspired many movies, and he has even been a guest star in shows, including the comedy, The Big Bang Theory. Below is a list of films inspired by him, his research, and his ideas.