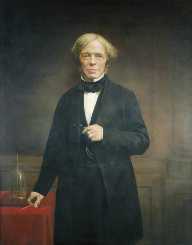 Michael Faraday, (1791- 1867), has been acknowledged as the greatest scientific pioneer who ever lived. He defied all odds when it came to science, at a time when it was mostly associated with the wealthy and privileged families. As great physicist and chemist, he has immensely contributed to the Electromagnetism and Electrochemistry knowledge. He has also been responsible for coining words such as ‘cathode,’ ‘electrode’ and ‘ion’.

Michael Faraday was a third child in a family of four and born on September 22, 1791. His family was by then living in Newington, Surrey, England. His father was James, a blacksmith and mother Margaret Faraday. Faraday came from a poor family and his father was often ill and could not supply adequate sustenance to the family.

Michael received basic education and worked as a novice bookbinder at the age of 14.  Here, Michael was able to educate himself for the next 7 years, through reading books on a vast range of scientific subjects. He then developed an interest in the physical and chemical works of the time.

In 1812, Michael Faraday was lectured by famous chemist Humphry Davy of the Royal Institution. He then sent a bound copy of the notes including a letter requesting for employment to Davy which he later declined since there was no open position. In 1813, Davy got Faraday a job as his laboratory subordinate after he spoiled his eyes in an experiment using nitrogen trichloride. Michael was 21 years of age at the time.

In 1813, Davy was set on an 18-month tour of the continent. Davy’s valet did not wish to accompany him so he had Faraday fill in for his position. Faraday played the role of valet throughout the tour. Davy’s wife, Jane Apreece, subjected Faraday to mistreatment since she did not regard him as an equal but as one of the servants. This led to Faraday contemplating of his journey back to England. However, the escapade exposed him to the world of scientific elites and with astonishing ideas.

In 1845, Michael Faraday worked as a lecturer at the Royal Institution, he lectured on the topic of education.

In his earlier scientific years of work, Michael Faraday concentrated mainly on chemical related problems. He was able to discover two new chlorides of carbon and triumphed on liquefying chlorine and other gas. In 1825, he managed to isolate benzene from other compounds. He was appointed a director of the Royal Institution's Laboratory the same year.

Faraday successfully investigated the alloys of steel thereby producing different types of glasses used for optical purposes. He used the glass in his experiment to determine the rotation of the plane of polarization of light. He was involved in the earliest invention of the Bunsen burner, an equipment widely used in laboratories globally as a source of heat.

Michael Faraday is renowned for his electromagnetic rotation invention in 1821. This has invention has contributed to the electric and generators we see in our day. This was after Davy and William Hyde, a British Scientist, tried to design an electric motor but failed. Faraday went on ahead to develop two devices to generate what he termed as “electromagnetic rotation”.

On 28th October 1831, two years after the death of Davy, Faraday wittily discovered Electromagnetic Induction. This came about after his experiment that involved an iron ring bound with two securely insulated coils of wire. He then realized that when he passed current through a single coil, a momentary current was produced in the other coil. This concept is now known as mutual induction.

In 1834, Michael Faraday discovered the science of electrolysis. This is a study of chemical processes that lead to the movement of electrons. Electron movement is what is termed as electricity.

In 1823, during his extensive study of electricity, Faraday concluded that the charged lounged on the exterior of the charged conductor and had no impact or effect whatsoever on adjacent objects near the conductor. This was later on termed as the Faraday Cage. The mechanism behind it was that the exterior charges reorganize in such a manner that the internal fields coming from them cancel out.

In 1845, Michael Faraday discovered Diamagnetism. A scientific principle that implies that materials exposed to a magnetic field forces, repel the path of the applied magnetic field.

Michael Faraday was a devoted Christian laying his faith on the Sandemanian church. He met his wife, Sarah Barnard (1800-1879) through their families in the church and later on got married on 12 June 1821. After his marriage, Faraday served the church as a deacon and as an elder in his youth’s meeting house. Faraday and Sarah had no children.

In 1829, Michael Faraday was awarded the Bakerian Lecture Award ‘for the manufacture of Glass for Optical Purposes’. Also, in 1832 and 1838, he received the Copley Medal for his research in the special electrical induction and his discovery of Magneto-Electricity respectively. Moreover, in 1835 and 1846, he was awarded the Royal Medal for his broad experiments in the different facets of chemistry and physics respectively.

In 1846, Michael Faraday was awarded the Rumford Medal for his discovery relating to the action of magnets and electric currents. He received the French Legion of honor as a physicist for discovering electrical conduction in 1855. He was honored with the Albert Medal for his discoveries in magnetism, electricity, and chemistry in 1866.