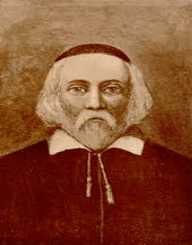 William Brewster was an English pastor who was one of the passengers on the Mayflower.

William Brewster was born sometime in 1566 in the village of Scrooby, county of Nottinghamshire, England. His father’s name was William, and his mother’s name was Maud. He enrolled at Peterhouse College at the University of Cambridge. He spent some time there before dropping out. He started working for the diplomat William Davison. He then returned to Scrooby and became the postmaster. He established a Separatist church in the village and often held meetings in his manor.

William Brewster married a woman named Mary in either 1591 or 1592. They had three sons, called Jonathan, Love, and Wrestling, and two daughters, named Temperance and Fear.

To flee from persecution from the Anglican Church, William Brewster moved to the city of Leiden, Holland. He became an English teacher at the University of Leiden. He started to print religious books and pamphlets, which he then illegally smuggled into England. The English authorities found out and began to chase him. He had to spend a year into hiding.

William Brewster was one of the 102 passengers on the Mayflower ship. He took his wife and two youngest sons with him. He also took care of Mary and Richard More, the children of Katherine and Samuel More. The journey was harsh, and many of the passengers died, but Brewster and his family survived.

Upon arrival, William Brewster became the senior elder of the Plymouth Colony. He was well-educated and had diplomatic experience, so he became the preacher and Separatist leader of the group. His oldest son and his two daughters soon arrived at the colony. In 1632, he started his farm in Duxbury.

William Brewster passed away in Duxbury, Plymouth Colony, on April 10, 1644. His body was buried at the Burial Hill. His memorial stone still stands on that location.

There are four islands named after him in the Boston Harbor Islands National Recreation Area – Great Brewster, Outer Brewster, Little Brewster, and Middle Brewster. There are also two towns named after him, one in Massachusetts and another one in Nebraska. The park in the middle of Plymouth is called Brewster Gardens. There is also a specific type of chair which is called Brewster Chair.

Many of Brewster’s descendants have achieved great success in the fields of business, politics, journalism, science, and acting. They include President Zachary Taylor, Vice President Nelson Rockefeller, Governor Sarah Palin, actor Richard Gere, actress Katharine Hepburn, and many others.