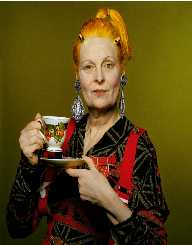 Vivienne Westwood is a famously known British fashion icon who has made significant contributions to the fashion industry. Her styles and designs are widely admired especially by women who have complimented her works. Vivienne has been in this career for more than 34 years with her influence being felt in many fashion houses globally. She has also worked for royalties and icons like Camilla the Duchess of Cornwall, Princess Eugenie of York, Cameron Diaz, and Tracey Emin among other famous figures. Her fashion is commercially desired by her fashion houses established in many countries around the world.

Dame Vivienne Isabel Westwood also was known as Swire was born on 8 April 1941 in Tintwistle Cheshire. She is the loving daughter of Dora Swire and Gordon Swire who worked as a storekeeper and greengrocer. Vivienne went to Glossop Grammar School from where she graduated in 1958 the same year her family moved to live in London. Westwood enrolled at the Harrow School of art at Westminster University and took on a fashion course before quitting college. Vivienne sought for a job at a factory and eventually joined a teachers college to study teaching. She began teaching in a primary school and at the same time making and selling her brands of jewelry along Portobello Road.

Vivienne Westwood started her collections in 1990 beginning with the menswear line which was followed by the establishment of the Vivienne Westwood Boutique in London. She was inspired even more when her designs began drawing attention and inviting reviews. Consequently, she started designing wedding apparels and gowns in 1992 and also came up with a watch collection known as ‘Putti’ while working with ‘Swatch.’ Her products gained popularity and ‘Swatch’ partnered with Vivienne for a second time in 1993 which led to the establishment of ‘Orb’ a collection of watches. She also worked with Brinton’s in 1994 having been contracted as its designer for their carpets.

Vivienne also established a fashion house in New York in 1999 followed by a collection of eyewear, body products, and toiletries. The following year, Vivienne introduced her perfume brand known as ‘Libertine’ also starting a fashion shop in Hong Kong. Milan and Liverpool are cities that were lucky to embrace this magnificent work of fashion seeing two shops established there in 2003. Vivienne was also responsible for the royal designs that Camilla wore when she became her designer in 2009. She was also associated with other public figures like Princess Eugenie of York who was impressed by her designs.

Vivienne Westwood was honored by Queen Elizabeth II with the title ‘The Most Excellent Order of the British Empire’ in 1992. She received the ‘Outstanding Achievement in Fashion Design Award’ in 2007 and the ‘Prince Philip Designers Prize’ in 2010.

Vivienne Westwood met Derek Westwood at a factory in Harrow, London where she was employed. The couple dated for some time and got married in 1962 and in 1963 they welcomed their first born son before divorcing in 1965. After her divorce, she met Malcolm McLaren with whom she began an affair and bore him one child.

Vivienne Westwood later married Andreas Kronthaler in 1992 who was her fashion student. Initially, the couple lived in Nightingale Lane for 30 years before relocating to Queen Anne house.